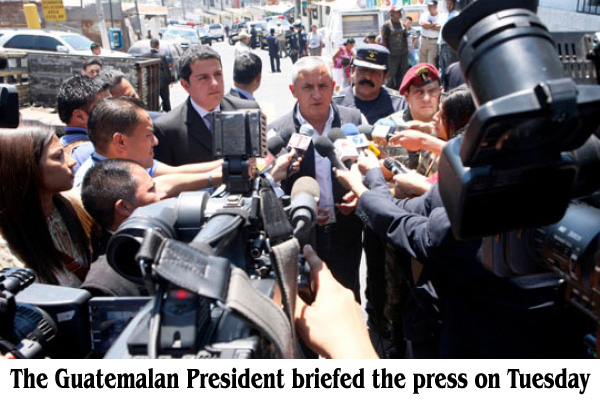 Guatemalan president Otto Perez Molina appeared in Guatemala media reports again on Tuesday, March 19, insisting on the nation’s position that the national referenda to be undertaken by Belize and Guatemala, to decide on whether the territorial differendum should be settled by the International Court of Justice (ICJ) ought to be postponed to 2014.

Last April, both parties agreed on Sunday, October 6, 2013, as the day for the referenda. That date is 7 months away, but Guatemala now wants to delay the vote.

Until today’s meeting of the Belize House of Representatives, the Government of Belize has been tightlipped on the details of Guatemala’s proposals. However, Minister of Foreign Affairs Wilfred Elrington finally made them public, as parliamentarians convened for day one of the 2013 budget debate.

According to Elrington, Guatemala has presented two proposals. Firstly, they are asking for Belize to amend its referendum legislation, which in 2008 was changed to require that 60% of the electorate vote in a referendum in order to deem it valid.

According to Elrington, the Guatemalans want Belize to change its law, “so that our legislation will be identical to theirs, in terms of requirement for a referendum to be successful.”

This change would mean that a simple majority vote would validate the referendum.

“If we amend the law to conform with theirs, they would then be prepared to agree on another date when we could hold simultaneous referenda—but they were not prepared to indicate when that date would be and they were not even prepared to give a timeline…” Elrington added.

As for Guatemala’s second proposal, they are saying, let Belize go ahead on October 6, 2013, and then Guatemala would proceed with its referendum if the Belize referendum yields a “yes” vote, Elrington explained.

Elrington said that under the second scenario, “…they would be prepared to hold their referendum at a date not later than the end of June 2014…”

Speaking after Elrington’s announcement, Prime Minister Barrow said: “I don’t like what’s being proposed by the Guatemalans!”

Barrow indicated that Guatemala’s proposals must be tabled to Cabinet, and there will be discussions with the Leader of the Opposition on the way forward. Barrow said that after analyzing the proposals, the parties will work to reach a “unified national position.”

Elrington said that the Belize position will be conveyed back to the OAS.

Guatemala’s president, Perez Molina, told journalists in Guatemala Tuesday that his administration wants to reach a common position with Belize and the OAS, on the question of the referendum of the territorial differendum between the countries. He said that consultations are ongoing towards this end.

In referencing last weekend’s meeting between Belize and Guatemala at the OAS in Washington, Perez Molina said the objective is to have favorable situations on both sides, and that neither wants a referendum that they would lose.

Although consultations are, in principle, held to canvass the will of the persons being consulted, both Belize and Guatemala, on the official front, are assuming and are promoting a “yes” vote.

The parties are pursuing the current move for simultaneous referenda in Belize and Guatemala under a special agreement signed back in December 2008 at the OAS.

Elrington said today that Guatemala has indicated its desire to stick to the 2008 special agreement, and to take the issue to the International Court of Justice.

“For that reason, they proposed a change of date,” he said. “We advised them that we could not make a decision.”

Elrington returned from Washington on Wednesday, and since then, he has had a chance to communicate with the Prime Minister but not with the entire Cabinet. That Cabinet briefing, he said, would happen next week.

Elrington said that “this will have to be decided by the people of Belize, in a consensus fashion, in my view.”

Amandala spoke Wednesday with Senator Lisa Shoman, who represents the Opposition People’s United Party in the bilateral talks and who also traveled to Washington for this weekend’s meeting.

She told us that she will be discussing Guatemala’s proposals with Opposition Leader Francis Fonseca and the party would have to discuss them before arriving at its position.

After Belize’s position is communicated to OAS Secretary-General José Miguel Insulza “then he will take the next step in this saga,” Elrington said.