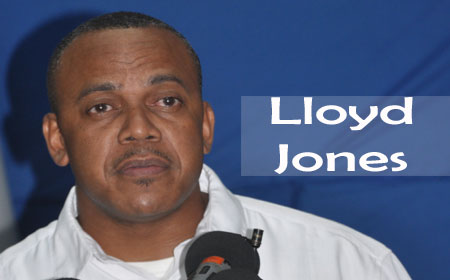 BELIZE CITY, Mon. May 4, 2015–Last year August, the Opposition People’s United Party (PUP) suspended the attorney Arthur Saldivar as its Belize Rural North standard bearer, creating something of a vacuum in the sprawling constituency which has 27 villages spread out over a vast amount of space.

At its Independence Hall headquarters this morning, the PUP moved to fill the vacant Belize Rural North standard-bearer slot with a political newcomer – the retired Belize Defence Force Major Lloyd Jones has stepped into the political fray and was introduced as standard-bearer for the division.

Prior to his move in the political arena, Jones has been quite outspoken on national issues, particularly the defence of Belize and the unfounded Guatemalan claim.

PUP Leader Hon. Francis Fonseca spoke glowingly about Jones’ many accomplishments, including his ascension up the ranks of the BDF and his accomplishment in studying at the Royal Military Academy in Sandhurst in the United Kingdom, where British military leaders and Commonwealth officers are trained.

Fonseca said, “Major Lloyd Jones is a man who I have great respect and great admiration for. He has selflessly served our nation for many, many years. He served in the BDF for 15 years and had a distinguished career. Major Jones, when he left the BDF, also served for six years as Belize’s Ports Commissioner.”

Fonseca said that he has had many discussions with Major Jones over the last few months, and noted, “what inspires me the most about his candidacy is his strong independent spirit and passionate love of country.”

“He has been a very outspoken advocate for Belize’s territorial integrity, and national security, an area in which he has lots of expertise,” Fonseca said.

Major Jones was also introduced by the PUP Lake Independence standard-bearer Cordel Hyde, who began by stating that the people sent the PUP party a clear message on March 4, “that we were not moving right, that they were not convinced and that we needed to go back to the drawing board.”

Hyde said that Jones’ candidacy is a response to those directives from the people. “His reputation precedes him,” said Hyde, who added that “he is known as a nationalist – an outspoken nationalist.”

“He could have taken the easy path and towed the line that the powers that be offered. He could have landed a nice, cushy job somewhere, safe and secure. Or he could have continued to write and talk when he felt like it and someday land in the Senate and in the Cabinet. There is precedence for that. But he chose to not just talk the talk. He has chosen to walk the walk,” said Hyde.

Hyde said that the hope of the people should be handled with care and that when that trust is lost it takes a while to restore. “It takes time and effort and commitment … We messed up that trust way back when and we are working hard to restore what we had with the people. The candidacy of Major Jones is about rekindling that hope. It’s a deliberate step in that direction,” he said.

Before he began his address, Jones asked for a moment of silence “for the late Lord Mayor, David Fonseca.”

Jones began his address by thanking the PUP Eastern Caucus and the Belize Rural North Executive Committee which have welcomed his candidacy.

Jones also expressed his appreciation for “the tremendous contribution of the former standard-bearer Arthur Saldivar”. “It was through his hard work and that of the party that he was able to narrow the gap in 2008 and 2012,” he noted.

Jones said that he would like to encourage other honest, hardworking individuals to look to the political arena to serve. Belize needs people like this.

“Why politics and why the PUP,” Jones asked.

“There is an old saying, ‘to whom much is given much is expected.’ The people of Belize have given me so much that I decided to come to their aid. It was the BDF that rescued me back in 1989. And on the backs of the Belizean people, I attended the best military schools in the world. I studied strategy; I studied political science; studied the nautical science. It was on the backs of the Belizean people that I traveled the world,” Jones said.

“It is only fair that I serve the people who have given me so much,” Jones said.

In explaining why he decided to represent the PUP, he quoted from the PUP Constitution, section 6 and 7, saying that what is in there is exactly what Belize needs to develop and advance.

Jones said that in his discussion with the PUP party leader, Francis Fonseca, he (Fonseca) expressed his commitment to the ideals of the Party, and said “that he is committed to a new pact for the PUP, one that would put country before party, and one that would be fair to all manner of Belizeans irrespective of your political party. The PUP is the party that has transformed Belize from colony to independence. And come 2017 or whenever the elections are called, we are going to deliver.”

Jones will be endorsed at a convention, the date of which has not yet been made public.

The present Belize Rural North area representative Edmund “Clear The Land” Castro is being challenged in a convention by his former campaign manager and former CEO Dwight Tillett, so Jones will face off with the winner of that convention in the General Elections.