Romolo Garcia, 55, found guilty for chopping Alberto Herrera on both his hands 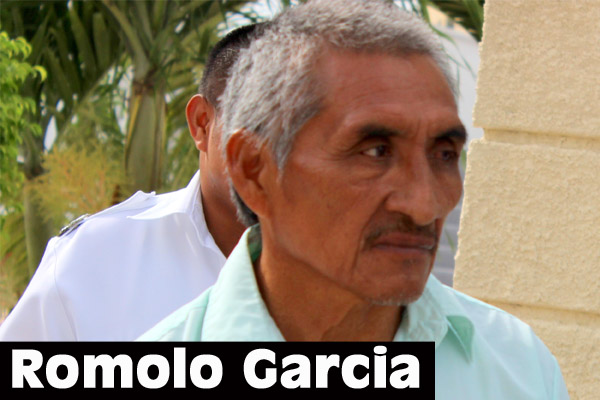 Romolo Garcia, 55, a cane farmer of Hattieville, was today convicted of use of deadly means with intent to cause grievous harm after a jury returned with an eight-to-one ratio of guilty.

In April of 2011, Garcia was entertaining his friend, Alberto Herrera, 64, at his home when an argument ensued, which quickly turned violent and ended with Herrera suffering chop wounds to his left forearm near his elbow, and to his right hand. The chop to his right hand severed all five of his fingers on that hand.

In the trial, testimonies of two of the witnesses — Herrera and the police officer who recorded his statement, Cpl. Victor Lima, had to be read to the court after it was proven that they both were dead. Herrera died as a result of septic shock after his fingers had been severed and he was diagnosed with diabetes. The stumps which had remained after his fingers had been severed had become infected.

Cpl. Lima was shot in his chest while responding to a burglary in progress in Hattieville, and died several days later.

In his statement to the police, Herrera said that he went to visit Garcia at his home at Mile 14 on the George Price Highway on the morning of April 1, 2011. When he arrived there, he and Garcia had started to drink extra strong rum with water, and had continued drinking through the morning and into the afternoon. It was at 3:30 p.m. that he mentioned to Garcia that he had known his (Garcia’s) girlfriend before she and Garcia got together.

According to Herrera, Garcia then started to accuse him of wanting his woman, and reached for a machete that was near the coconut tree where he was sitting. Herrera said that Garcia then tried to chop him, and in an attempt to avoid getting chopped, he ran into Garcia’s house to try to get another machete that was kept in Garcia’s bedroom.

Herrera said that before he could reach the bedroom, Garcia caught up with him and chopped him on his left forearm by his elbow. Garcia then raised the machete again and swung it toward Herrera, who then put up his hand to block the injury, but still got chopped, and that was when he saw some of the fingers from his right hand fall off.

Herrera said he then ran out of the house and across the street to a neighbour’s house for help and then realized that the rest of his fingers had been partially chopped off.

In his defense, Garcia told the court that Herrera had gone to visit him and after he (Garcia) gave him a cup of tea, Herrera left, only to return to his house with a bottle of rum, which he mixed with water and started to drink. Garcia said that he left Herrera outside drinking and went into his house and closed his door, but didn’t lock it. He said he fell asleep and after a while, he heard a noise and woke up to find Herrera in his room holding his machete, which was in its scabbard.

Garcia said that Herrera then told him “I am here to kill you,” and when Herrera was about to take the machete off its holder, Garcia ran underneath his table to avoid being chopped. He said that that was when he realized that Herrera had cut off his own fingers.

Herrera then ran out of his house with his fingers bleeding, but still swinging the machete in his other hand, said Garcia.

Garcia concluded his sworn testimony by telling the court that if he had chopped Herrera, he would not have stayed at home.

The nine-member jury deliberated for just over four hours before arriving at their guilty verdict. The Crown was represented by Attorney Kaysha Grant, while Garcia was unrepresented. Sentencing has been deferred to July 24, 2013.