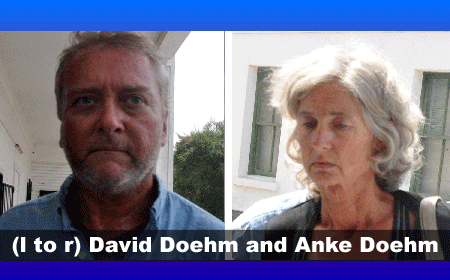 BELIZE CITY, Thurs. July 27, 2017–Arguably the most hated persons in San Pedro, Anke and David Doehm, have relocated to Belize City because San Pedranos have told them in no uncertain terms that they are not welcome to remain on the island after the brutal death of a 13-year-old girl who was in their care.

Tonight, however, residents of Reggae Street on Belize City’s southside contacted Amandala to express their discomfort and displeasure with their new neighbors.

The Doehms moved in at around 10 o’clock this morning, but neighbors want them to move out immediately, because they fear that their presence might disrupt the peace in their community.

Another woman who has lived on Reggae Street since 1989 told Amandala, “Me nuh want dey kinda people back yah, because they attract attention, and they attract things weh nuh fi happen to people.”

She claimed that the Doehms were already considered “criminals,” and so she did not want anyone seeking justice for Faye Lin Cannon, to come and “stone and shoot up in the area.”

According to her, the lives of innocent residents are now in danger in an already poorly lit community.

Another woman echoed her sentiments, telling Amandala, “This neighborhood is getting peaceful. We just need them to move out of the apartment. My mother lives across from them, and they are putting our children at risk.”

If the Doehms do not leave the area, residents say they, too, will lead protests to get them out by tomorrow, Friday.

They were recently released on Supreme Court bail after they were charged with cruelty to a child in connection with the death of their 13-year-old adopted child, Faye Lin Cannon, who, police reports say, had been physically and sexually abused before she died.