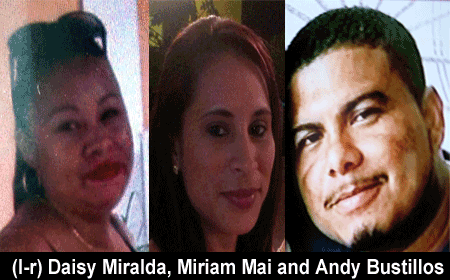 SANTA ELENA, Cayo District, Wed. May. 4. 2016–Two popular women, beauticians of Santa Elena Town, were shot to death in Betty’s Salon in Santa Elena, where they worked, at about 5:20 Saturday evening.

Their alleged killer is now in a stable but serious condition, under police guard, at the Karl Heusner Memorial Hospital.

Police say that on their arrival at the grisly scene at about 5:30 on Saturday evening, April 30, they saw Andy Bustillos, 35, a security officer of Anchor Security Company of Belmopan, who was wearing his uniform, lying on the floor with a gunshot wound to the right side of his head. He had a black CZ 9mm pistol in his hand, and he was still breathing. Two women were also lying on the floor.

Police’s initial investigation revealed that the women were attending to four customers in the salon when Bustillos, who was Mai’s common-law husband, entered the salon, approached Mai with a package and attempted to give it to her.

Mai, however, refused to accept the parcel, and according to the witnesses, he grabbed her by the neck, reached for his gun, put it on her neck and fired a shot. He then turned to Miralda, who had tried to intervene, and shot her in the forehead and in the side of the head.

According to a witness, he then pointed his gun at her and pulled the trigger, but the gun misfired, and she took the opportunity to flee out of the salon through the back door and down the hill; the other customers quickly escaped through the same exit.

Apparently, Bustillos then turned his gun on himself, and that time, it fired. Police say that he fired into the right side of his head and the bullet came out through his left eye.

Both women were transported to the San Ignacio Hospital, where they were pronounced dead, and Bustillos was taken to the Karl Heusner Memorial Hospital in a critical condition and remains under police guard.

Superintendent Richard Rosado, Commander of San Ignacio police, told Amandala yesterday that there was a history of domestic violence between Bustillos and Mai. Mai had separated from him for about two weeks, and on Saturday evening when he went to her beauty salon with a gift to reconcile their differences, she flatly rejected him and told him that she wanted nothing more to do with him, and threw the gift he gave her onto a chair.

This angered Bustillos, who took out his gun and began shooting the women.

A relative of Mai told Amandala that Bustillos had told many people that he was going to kill her, and she had gone to Bustillos’ employer at the security company for which he worked and made a complaint of the threats Bustillo was making on her life.

The employer reportedly said that he would ensure that Bustillos would always be disarmed after his shift and would at no time be in possession of a gun to harm her.

Mai’s family members said that on Saturday evening, Bustillos was on duty when he informed his supervisor that he was going for food. He did not hand in his gun as he should have, they said, and he walked out of his duty station armed.

They said that Bustillos then went to a nearby bar, where he had some drinks, and then went to the salon to shoot the two women.

Mai’s family is angry, and is demanding that Bustillos’ employer be held accountable for the death of their loved one, because the company did not ensure that Bustillos was disarmed when he was not on official duty.

According to the family, Bustillos was cruel and abusive to Mai. In fact, Superintendent Rosado said that the police had received a report from Mai that Bustillos had abused her, and a case is presently before the court.

On another occasion, he said, after Bustillos had assaulted Mai, she had demanded court action but later withdrew the charges against him.

Mai’s family said that last week Saturday, Mai went out and on her return home, she found her window damaged and her house broken into. When she entered the house, she found that Bustillos was the one who had broken into the house, had hidden inside and attacked her. He then choked her, slashed her face and dragged her around in the yard.

Mai then went to the police and made a report, requested a restraining order.

Superintendent Rosado said that the restraining order was given, but a subsequent investigation by police did not reveal that he had threatened her life.

Mai’s family said that her friends knew that she was being threatened, but she begged them not to report the matter, in fear that Bustillos would harm her son and her family.

Superintendent Rosado said that if Mai had gone to the police and reported the threats that were being made on her life, they would have looked into the case immediately and perhaps her life could have been saved.

Rosado said that threats to anyone’s life should not be taken lightly, and a report should be made to the police immediately.

Mai and Miralda are both mothers of three children each. Their families call for justice for the death of their loved ones.

Bustillos will be charged with two counts of murder and aggravated assault with a firearm when he is released into police custody.