A service of thanksgiving for the life of Kareem Jabbor Clarke 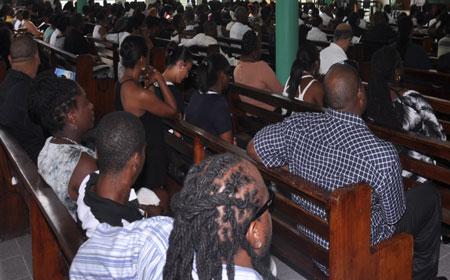 BELIZE CITY, Sat. July 11, 2015–Six days after he was senselessly murdered near the junction of Vernon and Lakeview Streets, the family, friends and media colleagues of Kareem Jabbor Clarke, an Amandala reporter who also performed various functions for KREM Radio and KREM TV, began to arrive around 1:00 p.m. at St. Joseph Church, where the body was laid in an open casket, before the service of thanksgiving.

The service got underway shortly after 2:00 p.m., when the casket was closed and Father Noel Leslie began his sermon, in which he lamented the tragic end of Clarke, who has been well known to the St. Joseph Church family, since his childhood days when he attended St. Joseph Primary School.

The eulogy was delivered by KREM TV’s Evan Mose Hyde, who narrated how Clarke had written twice to the chairman of Kremandala, Evan X Hyde, in his determined quest to pursue a career as a journalist at Amandala about two years ago.

Hyde explained how Clarke’s boundless energy and willingness to perform had led him to juggle his various tasks, which he carried out for the various branches of Kremandala – the Amandala newspaper, KREM Radio, and KREM TV.

Behind the Zinc Fence, Kareem Clarke had found a home, fitting in with the various sub-cultures on the Kremandala compound, Hyde explained.

This type of versatility, as well as an unrelenting drive and commitment that kept Kareem going with the energy of a “sport’s car” engine – reflected a way of doing things that we can all emulate, Hyde said. In referring to Clarke’s finesse, his warm-heartedness, and his ever-present willingness to give those around him all he had, Hyde said, “that’s how you Kareem it.” “Kareem”, he said, had become a verb, and the life Kareem lived, instead of being destroyed, has now become a “blueprint” for the type of young men that can rebuild the community. In addressing the killer/s of Clarke, Hyde bellowed defiantly that they could break his bones, or shoot him down in a cold-blooded act, but they could never destroy Kareem Clarke, or stop the spreading of his story. Kareem remains triumphant, he said. Kareem is a champion. Kareem eviscerated every stereotype of a young, black, urban male, he stated.

Kareem was “Mr. Dependable”, Mr. “Available”, Mr. “Get-The-Job-Done” – someone who rode all the way home to get a shilling to purchase candy for a niece of his when he realized he had no money with him.

Hyde also mentioned the camaraderie among journalists from various media houses, which he referred to as both “weird and beautiful”, as he described the love shared between Kareem and fellow journalists. “Then he is a part of the journalist cartel. They unveiled themselves for the first time publicly because of this great tragedy,” he mentioned.

Hyde described Clarke as “our poster boy,” whose story stood out as extraordinary, despite the array of amazing stories that have emerged from the Kremandala establishment, and lamented that the space he left would be hard to fill.

“Kareem Clarke loved the people he met; he loved his brothers and sisters and he adored and loved his family,” Hyde said.

“I want to say to the world what an awesome young man, what an uncle, what a brother, what a friend, what a coworker Kareem Clarke was … Kareem stands triumphantly … you can’t mek we remember Kareem Clarke as a gun victim,” Hyde declared.

(Photos by Rowland Parks used in tribute collage on page 12)