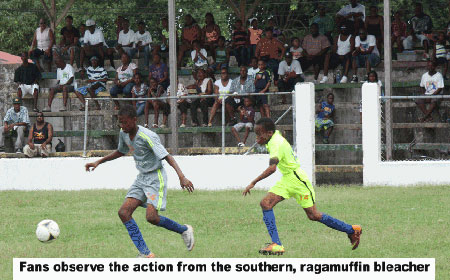 BELIZE CITY, Thurs. July 14, 2016–The fifth annual Smart 13 & Under Mundialito football tournament culminated in dramatic fashion on Sunday afternoon at the MCC Grounds in front of a handsome crowd of fans that included many parents and relatives of the young athletes; and after a scoreless draw in regulation and overtime in the finals, City Boys prevailed in sudden death after seven penalties were taken, to dethrone Brown Bombers, and become the champions for 2016.

Both the third place game and the championship final were played with 25 minute halves, and 5 minutes intermission.

There was added drama to the championship final, as the regular referee trio of Anthony “Willie Bo” Bernard, Godfrey “Brads” Jenkins and Francis Henkis were substituted by three officials from Belmopan – referee Pedro Recinos and assistants Marlon Paz and Allen Botes. It reminded us of days long past when the “committee” would bring in a referee from Army Camp for a big game.

The championship final between defending 2015 champions Brown Bombers and 2014 champions City Boys ended nil-nil in regulation, and there was still no score after ten minutes of overtime play (5-5). There were many “oohs and aaahhs” from the fans, as the game was well played with a number of near misses. They were still tied, 4-4, after 5 penalty kicks were taken, with each team missing one; so they continued in “sudden death” fashion, until Brown Bombers missed on their seventh kick, and City Boys prevailed 6-5 for the championship, as their fans stormed the field in jubilation.

In the award ceremony following the championship, Smart representative Anthony Mahler distributed team trophies, individual trophies to players on the champions and sub-champions, and individual awards as follows: