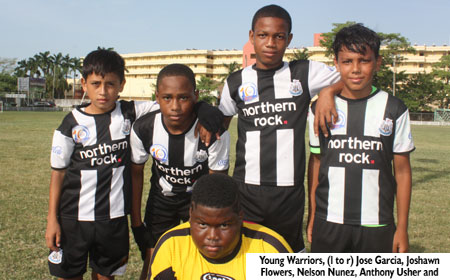 BELIZE CITY, Thurs. July 9, 2015–The Smart 13 & Under Football Tournament 2015 semifinals took place on Saturday, July 4, at the MCC Grounds, and they were two exciting and well contested matches.

In the first semifinal, #4 seed Ladyville Jaguars (coach Michael “Wataplat” Flowers) held the highly favored, undefeated #1 seed Brown Bombers (coach Shanell Gentle) scoreless through the first 25 minute half. The Jaguars’ strategy seemed to be a “lock down defence,” with all of their attack focused on the efforts of their top striker, D’Jon Canelo, who attracted heavy marking from the Bombers’ defence. After a number of near misses, including twice hitting the Jaguars crossbar, the Bombers finally got their goal through a deflected shot from fifteen yards by diminutive but highly skilled Eldon Byrd mid-way through the second half. Bombers’ coach Shanell Gentle then decided to play safe, and deployed her team’s main striker, and the tournament’s leading goal scorer, Jovaunn Ramos to defensive duties, helping to mark the ever dangerous Canelo. The goal held up for regulation, and with the 1-nil win, the Bombers maintained their impeccable record (no goals allowed throughout the competition) into Sunday’s final.

The other semifinal was evenly matched between #2 seed Collet Strikers (coach Paul Casimiro) and #3 seed Young Warriors (coach Daniel Fabro), ending scoreless in regulation and overtime. In the ensuing penalty shootout, Collet missed once, and the Warriors scored all five, taking the 5-4 victory and a berth in this Sunday’s championship finals.