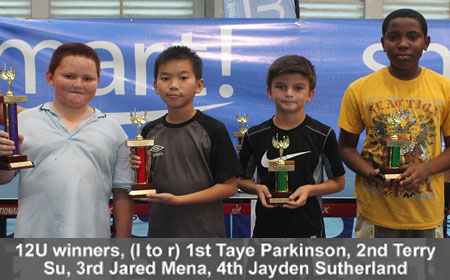 Some 120 junior players participated in this year’s event.

Competition format was a Round Robin Classification followed by Double Elimination FINAL Round.

In the 12Under Category, 14 groups started, with winners of each group advancing to the Double Elimination Finals.

The results were as follows:

In the 15Under Category, 22 groups started, with the winners advancing to the Double Elimination Finals.

The results were as follows:

The 18Under Category had 7 groups, with the winners advancing to the Double Elimination final round.

Trophies were awarded to all 4 winners by SMART public relations officer Mrs. Linette Cano.
SMART is the official sponsor of this bi-annual event for the past 3 years.

We thank all the players, participants, parents and organizers of the event for making this another successful tournament.
Big Thank You to SMART for their continued support to the development of table tennis.