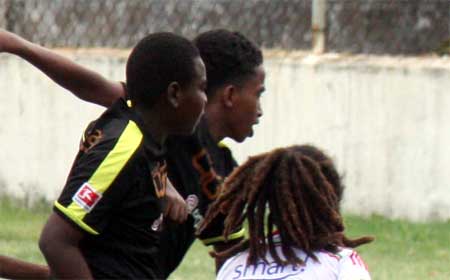 BELIZE CITY, Mon. June 26, 2017–The 6th Annual Smart Mundialito 13 & Under football tournament had its knockout semifinal games on Saturday, June 24, at the MCC Grounds, after 12 participating teams had completed a full round-robin of competition, with the top 4 teams pairing off in the semifinals.

It was high drama in both games on Saturday, as game 1 featured a first time playoff entrant, #4 seed Heights FC (19 points) from Mahogany Heights, and #1 seed Hattieville Riverside Boys (25 pts), a former champion who were undefeated in regular season; and game 2 that would see the reigning champions, #3 seed City Boys (22 pts) going up against #2 seed Ladyville Rising Stars (23 pts), who were also undefeated in regular season.

(Incidentally, there was one other undefeated team in regular season, Carlston FC, who in fact gave up a remarkable no (0) goals, but unfortunately didn’t make the playoffs, because they drew 8 scoreless games, while winning 3 from 5 goals scored. Carlston just missed the playoffs, completing the regular season at #5 seed with 17 points.)

Hattieville jumped to an early lead on a goal by Oswald Young, and seemed to be in a dominant position, but Heights held on, and got a late goal from Jahmeek Petillo, to end regulation with a 1-1 tie. It remained the same after overtime, and in the penalty shootout, Hattieville missed 1, while Heights remained perfect until the last kicker to seal the victory. There was tension in the air, as the ball rebounded out, and for a brief moment fans were not sure if it had hit the goal post; but the linesman pointed his flag to the center spot, indicating “goal,” as the ball had rebounded from the right corner iron inside the goal. When realization hit home, the Heights fans stormed the field in jubilation to celebrate their first trip to the Smart Mundialito finals.

The first semifinal was an upset of sorts, but it was anybody’s call when defending champion City Boys squared off against Ladyville Rising Stars, who had finished regular season with 23 points, 1 point more than City Boys (22 pts). And this game had its own measure of high drama. After a scoreless first half, little 11-year-old striker Tom Moguel gave City Boys a 1-nil lead; but in the last minute of regulation, a ball rebounded and rolled out from the City Boys defense, and Hattieville’s Steven Rivera met it about twenty-five yards out and let loose a right foot blast that stayed under four feet all the way – nothing but net. It was a spectacular shot; and on to overtime again. Midway through the first half of overtime, City Boys goalkeeper Gilbert Requena came out to retrieve an air ball, and used all of his eighteen (?) and sent a long high kick, that bounced high over the head of the back-pedaling opposing goalkeeper and into the open net – 2-1 the score; and it stayed that way until the long whistle, sending City Boys to the finals against Heights this coming weekend.

And it will be a Sunday affair for the finals: