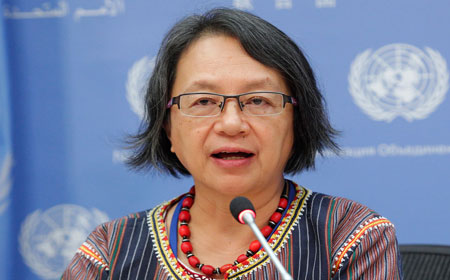 BELIZE CITY, Tues. July 7, 2015–In a statement issued today, UN Special Rapporteur on the rights of indigenous peoples, Victoria Tauli-Corpuz, called on the Government of Belize to establish a dialogue with the leadership of the Toledo Maya and to discuss outstanding issues over the case of Rupert Myles, who faces eviction from Santa Cruz, as well as the broader land tenure situation of the Maya people.

Appealing for that dialogue to ensue “in a spirit of partnership and mutual respect,” Tauli-Corpuz said that, “The current situation of conflict and mistrust cannot be allowed to persist.”
She added that, “Under international human rights standards, indigenous peoples have the right to use, develop and also to control the lands, territories and resources that they possess by reason of traditional ownership.”

The rapporteur cited the recent controversy over the attempted eviction of Rupert Myles from Santa Cruz after he was handcuffed and restrained with a rope, but later set free after signing an agreement to vacate the premises within two weeks of Saturday, June 20.

Tauli-Corpuz also decried the subsequent arrest of 12 Maya villagers and local leaders, who law enforcement authorities charged with unlawful imprisonment due to the detention of Rupert Myles in Santa Cruz.

“Mr. Myles was allegedly building a housing structure [in the buffer zone] on ancient Maya ruins in the village of Santa Cruz, in violation of Maya customary law and apparently despite repeated requests for the removal of the structure,” said the UN statement, adding that calls by the Maya for law enforcement personnel to help them remove Myles were ignored.

The position of the Government of Belize is that the Maya should have triggered the proper legal process, which entails going to the courts of Belize to seek an eviction order, upon which, if such an order were granted, the police could have acted lawfully to aid in the removal of Myles.

Pablo Mis, spokesperson for the Maya Leaders Alliance, told Amandala that the house which Myles had built was not removed within the two-week timeframe he had agreed on; but, according to Mis, Myles, whose wife still lives in the village with her father, has not been in the village recently.

The Maya are asking the Caribbean Court of Justice, which recently entered a consent order in favor of the Maya, affirming their land rights claim, to issue a new order against the Government of Belize. They are also asking for pecuniary and moral damages for alleged violations in Santa Cruz, San Isidiro and Golden Stream.

The Toledo Maya are also asking the CCJ to order the Government to enter into consultation with representatives of the Toledo Maya within 30 days.