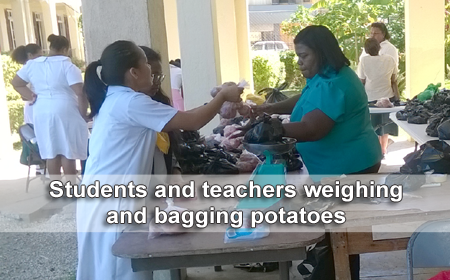 BELIZE CITY, Thurs. Feb. 23, 2017–Potato growers are presently finding it very difficult to sell their produce and are taking heavy losses due to a glut on the market caused by the importation of contraband potatoes.

However, two farmers from the San Carlos Group in Orange Walk were given a boost by the staff and students (assisted by their parents) of St. Catherine Academy in Belize City. The students bought 1,800 pounds of potatoes and their sister school, Muffles College of Orange Walk Town, bought 1,500 pounds today.

Salome Castillo, principal of St. Catherine Academy, told Amandala today that the farmers were paid $1, 620 when they brought their produce to the school. She said that the money to the farmers was a drop in the bucket, but every little bit counts.

Castillo said that she saw the plight of the farmers on the news and decided to do something. She prayed and then acted. She then asked the students to support the farmers yesterday, and a few of them agreed, but when they came to school this morning, many more of them had agreed, and also, many parents and their friends had also agreed to help the farmers.

She then contacted the Ministry of Agriculture, who told her to contact the farmers. She then went to San Carlos, and the farmers were pleased by the proposed purchase, and agreed on a price of 75 cents per pound, but a price of 90 cents per pound for potatoes delivered to Belize City. The agreement was made and the potatoes were delivered.

On our visit to the academy this afternoon, we saw the students weighing and bagging potatoes for delivery. Castillo said that the students organized themselves and made an efficient system for delivering the potatoes to those who participated in the purchase.

Castillo said that besides teaching the students’ academic lessons, the school also aims to impart lessons in compassion and the need to empathize with others. They are also taught to pray and act. The principal also wants other schools to step up to help the farmers during this rough time. The schools might not be able to buy the potatoes frequently, but she is asking the parents of the students, their friends and associates to assist the farmers by buying the produce from them.

Hon. Senator Godwin Hulse, Minister of Agriculture, reported that the last license issued by the Ministry to import potatoes was on January 18, and it was for the importation of 40,000 pounds. He said that 100,000 pounds of potatoes are consumed weekly nationally, and the amount imported on January 18, should have been exhausted a long time ago, but contraband potatoes are still being sold on the market. The Minister called on the police and Customs personnel to step up patrols to stop the contraband.

Hulse said that a proper storage system is required where the produce is held while it is released in a timely manner into the market, and also, scheduled planting and harvesting must be carried out by the farmers to avoid over-production.

He added that he would ensure that this be done for the next season. He said that contraband potatoes cannot be eliminated, because the local growers cannot supply the local market for the whole year. They can only do so for about 6 months, since they produce 2 million pounds among all the growers, which is a supply of 20 weeks, or 5 months’ supply.

Hulse said that potatoes will be imported as needed, but a committee will be set up to oversee the importation.