Home Headline No “sugar” for BTL shareholders yet
HeadlinePolitics

No “sugar” for BTL shareholders yet 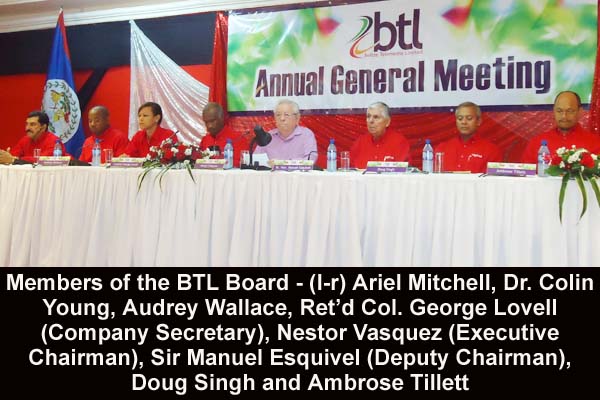 Prior to the Sixth Annual General Meeting of Belize Telemedia Limited (BTL) tonight, there was open speculation as to whether the company — in light of this week’s ruling by the Caribbean Court of Justice that the Government as majority shareholder in the company (it holds 63 percent of shares including the Special Share) must postpone the declaration of dividends to all shareholders until December 14 per an application by the Ashcroft Alliance filed earlier this month — would comply and withhold dividends from its shareholders.

Before that issue was decided, at the King’s Room of the Princess Hotel in Belize City, shareholders heard from their board of directors as to the company’s activities in the past year and its ambitious future plans.

In the business portion of the AGM, after the meeting received and considered the Directors’ Report and the company’s financial statements for 2011-12, Executive Chairman of the company’s board of directors, Nestor “Net” Vasquez, reported to shareholders that the Government had written to the company this week asking that they comply with the CCJ ruling and withhold the declaration of dividends until the 14th of December, 2012, or later.

Attorney for BTL, Rodwell Williams SC, had earlier answered a question by shareholder Armando Castillo as to the legal authority of the CCJ to decide on a question that has not even reached its docket by revisiting the strange history of the 2009 and 2011 acquisitions by Government.

The 2009 acquisition has reached the CCJ, but according to Williams, it has been overtaken by the combination of the 2011 acquisition and the Eighth Amendment, which was decided by the Supreme Court in June (the court found the method of acquisition unconstitutional but found that the provision in the Constitution vesting control in Government was constitutional and did not grant relief to the Alliance) and will now go to the Court of Appeal on Monday, October 8, for hearing.

Members of the board, Ambrose Tillett and deputy chairman, Sir Manuel Esquivel, also weighed in. Tillett, in responding to a question from the floor, stated that the issue was not so much one of who owns the company, but is rather about compensation due to its former owners, which has not been agreed on. Sir Esquivel pointed out that the court decision did not distinguish between shareholders when asked if the Government’s portion of dividends could be withheld and the rest paid out.

Shareholder and attorney Michael Young said from the floor that the Alliance’s fight is not with its former property of BTL, but with the Government of Belize.

Vasquez as company chairman closed the discussion by asking the Annual General Meeting, under Article 67 of the company’s Articles of Association, to adjourn sine die (without a date), which was unanimously approved. The company will be seeking legal advice as to whether another meeting needs to be called specifically to discuss and declare dividends.

According to the published financial report and director’s report for the just-concluded year, net income fell 22%, or 15 cents a share. Gross revenue, at $145.4 million, was down 8% from the previous year, though some $13.6 million of that was a one-time inflow due to a change in tax rate on internet revenue and not loss of revenue from services, which has stabilized despite consistent reductions in rates, said Vasquez.

Dr. Carla Barnett had resigned from the Board during the past financial year, leaving a space for a publicly elected director, which was filled by former Income Tax Commissioner Eric Eusey, the sole nominee, who was elected unanimously by the audience to serve a one-year term. Auditors Pannell Kerr Forster were reappointed as auditors to the company, also for a one-year term.

The members of the Board, in addition to Vasquez, Tillett, Esquivel and Eusey, are CEO in the office of the Prime Minister Audrey Wallace, CEO in the Ministry of National Security and Company Secretary Colonel (Ret’d) George Lovell, former Minister of Police and Public Safety Douglas Singh, Ariel Mitchell and Colin Young.

The company and its chairman boasted of a “year of transformation,” as it expanded numerous services and contributed to numerous community projects across the country.

BTL said it is committed to faster and improved service delivery to customers and internal “culture change” and operational efficiency. It made numerous improvements to its infrastructure for key services, chief among them new cell sites in remote areas of the country including the south and areas of the Orange Walk and Corozal Districts.

The highly-anticipated 4G Digicell network, according to Vasquez, is well on its way to be ready as a “Christmas present” to the nation, with the final leg of installations set to commence this month, after the contract was signed with Ericsson in January.

The BlackBerry service, lower internet rates for customers and free access for schools, lower call rates and ease-of-use services such as mobile banking and multimedia messaging (MMS) were also introduced this year.

Vasquez also clarified recent reports that Belize has one of the least favorable price markets for internet services in the Caribbean, saying that comparison to countries with larger populations and improved access such as Jamaica, is similar to comparing apples and oranges. BTL, he said, is proud of its efforts to provide free internet to schools countrywide and improved service to the majority of customers.

In the area of community development, BTL continued its assistance to numerous sporting disciplines (sailing, cycling, chess) and community organizations (Scouts, Police, 4H, Rotary, Diabetes Association) while making donations to activities around the country and expanding its scholarship program.