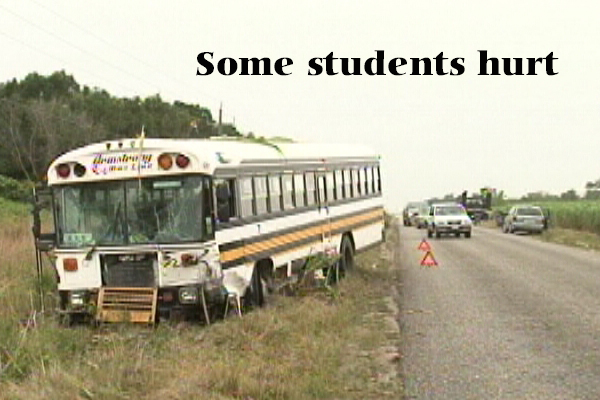 Several students were hurt when an SUV collided with a bus carrying students to school, at about 7:35 yesterday morning at an area between Miles 69 and 70 on the Philip Goldson Highway in Corozal.

The driver of the SUV, Eusebio Urbina, 58, of San Roman, also suffered injuries.

Urbina was travelling in a Jeep Cherokee from Santa Clara to Buena Vista in the Corozal District, when he lost control of his vehicle between Miles 69 and 70 on the Northern Highway, and slammed into the left front side of an oncoming school bus, being driven at the time by Lawrence Tillett, 55, of Belize-Corozal Road in Orange Walk, carrying students to the Belize Adventist College in Calcutta.

As a result of the collision, Urbina sustained a cut wound to his forehead, and complained of pain in the entire left side of his body – his left shoulder and left leg in particular.

Police said that statements from the witnesses were recorded, and a Notice of Intended Prosecution (NIP) was served to both drivers.

Police said that on their arrival at the scene of the collision, they saw a blue Jeep Cherokee parked on the left side of the road with extensive damage to its front portion, and parked off the road in a cane field was a white and yellow 1996 Blue Bird bus, with damage to the left front side.

According to police, while Urbina was driving in the Jeep on the Philip Goldson Highway from the direction of Santa Clara, he lost control of the vehicle, and as a result drove into the left lane, into the incoming traffic, and that was why he collided with the left front portion of the bus, which was traveling in the opposite direction.

The bus then ran into a cane field on the left side of the highway.