Teachers, unions will get raise-a-pay next year: PM Barrow 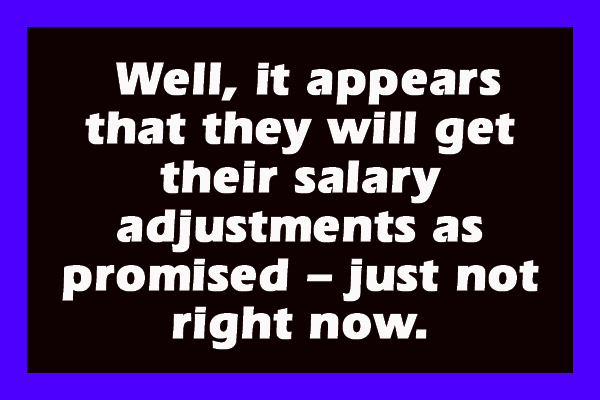 Some three weeks ago, the unions – in particular the Belize National Teacher’s Union (BNTU) and the Public Service Union (PSU)– complained to the media because they thought that it was time to go back to the negotiating table with Government with regards to their proposed salary adjustments, especially since Prime Minister Dean Barrow had publicly said that GOB was “rolling in millions and millions of dollars.”

Well, it appears that they will get their salary adjustments as promised – just not right now.

Sporting a new look at today’s press conference, Prime Minister Barrow assured the public servants that they would get a pay raise; however, he added that they (the unions) need to exercise patience.

The unions are hoping that Government heeds their demands and commits to setting a minimum salary increase, known commonly as a ‘floor’.

However, they might be a bit out of luck where that is concerned, since today, the Prime Minister committed to a pay increase, but he is still hesitant to commit to the ‘floor’ for which the unions have been agitating.

According to Barrow, the teachers and public servants will have to “batten down,” or in other words, hold on or wait until next year to receive their pay raises.

Barrow said: “The teachers and public officers can rest assured that salary increase there will be. It will take place next year, after we’ve had a chance to see what the entire revenue stream is for the fiscal year, so it would kick in… I think in July, but I think retroactive to April first, and I am positive that – as I’ve said – that there will be a substantial increase.

“But, Lord, man, I have to appeal to the unions. Please, that is what I had put to you; I thought that we have pretty much had an agreement. Now is not the time to say that we demand that you give the increase now in the middle of the financial year, and we demand that there be a floor. Look at what is happening to the entire country as a consequence of the calamity that has overtaken us. Look at all that the Government has to do for all the people of this country. And as a matter of solidarity, please be patient.”

Today, Amandala contacted the NTUCB president, Dylan Reneau, to find out his response in relation to the proposal by the Prime Minister. He, however, directed us to either BNTU president Luke Palacio or Public Service Union president Marvin Blades.

We were able to reach Palacio, and he told us that he was not aware of the announcement by the Prime Minister; therefore, he was not able to comment on that matter. Palacio did mention, however, that he will get in touch with his colleagues to find out more about the circumstances, after which he will be able to make a statement.