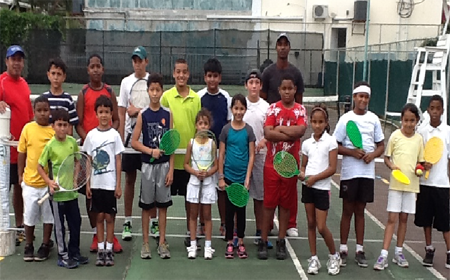 BELIZE CITY, Wed. Jan. 28, 2015–Nineteen youths from Hummingbird Elementary School, St. Mary’s Primary School, Horizon Academy, Belize Elementary School, and the City of Belmopan took part in the Red Category and Green U15 Category tennis tournament this past Saturday. With the Belize Tennis Association getting tennis into more primary schools, the participation is slowly but surely increasing, and more children are being exposed to this great sport.

In the Red Category, which is played on a smaller scale court with the bigger and lower pressure balls, 14 participants played round-robin style. The top four who proceeded to the semifinals were James Courtenay, John Paul Jaramillo, Daniel Musa and Anthony Rudon. Daniel overcame Anthony Rudon, and James defeated John Paul to reach the finals. In the finals, little Daniel Musa took the victory over James Courtenay in a great match with long rallies, 15-9.

The Green Category had five participants who also played round-robin to increase their playing time. Jonathan Smith and Harnadar Tut made it to the first semifinal, with Tut overcoming Smith, 4-0. The second semifinal saw Stefan Sosa prevailing over Samron Pott, 4-1. The final was between Harnadar Tut and Stefan Sosa, which was an exciting match. Both competitors displayed great tennis acumen, but in the end, Harnadar Tut from Belmopan took the victory and his first ever first place over Stefan, 6-4.

Medals were presented to first and second place in both categories. The Belize Tennis Association takes this opportunity to especially thank the first time participants from St. Mary’s and Horizon Academy for partaking, and also their parents for supporting and encouraging their children in the sport of Tennis. All tennis players, especially the YOUTHS, are encouraged to keep on playing and practicing for the upcoming tournaments!