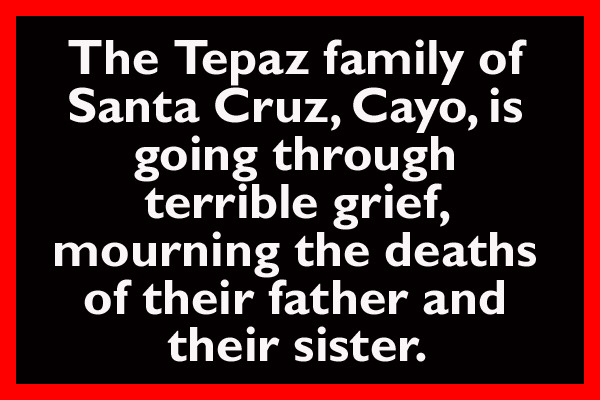 The Tepaz family of Santa Cruz, Cayo, is going through terrible grief, mourning the deaths of their father and their sister. Their sister, Glendy Tepaz, 14, died yesterday, Sunday, in the Karl Heusner Memorial Hospital (KHMH) while undergoing treatment for injuries sustained as a result of a road traffic accident in which her father was the driver of a vehicle that ran off the road and smashed into a container that was inside a yard. Then yesterday, Sunday, after his daughter’s death, her father, unable to bear the excruciating pain, drank a herbicide and died shortly after.

Police reports are that about 7:20 p.m. on Thursday, October 17, they went to the junction of Joseph Andrews Drive and Branch Mouth Road in San Ignacio, where they saw a grey Toyota pickup truck with damage to the front portion parked on the right hand side of the road. Their investigation revealed that Ricardo Antonio Rosa Tepaz, 41, a naturalized Belizean of the Santa Cruz area of Santa Elena, was driving his 1987 Toyota pickup truck to San Ignacio when he lost control of the vehicle, ran off the road and collided with a container that was inside a yard.

Traveling with him at the time were his children: Dennis Tepaz, 17, who suffered a cut wound to the right side of the head; Glendy Tepaz, 14, who suffered head and body injuries; and Elmer Tepaz, 13, who apparently did not suffer any serious injuries.

According to police, blood and urine samples were taken from Ricardo Tepaz and sent for analysis at the Forensic Department, and the results are not in as yet.

About 10:00 yesterday morning, Sunday, October 27, Glendy Tepaz succumbed to her injuries at the KHMH.

Shortly after Glendy was declared dead, police said, Ricardo Tepaz drank a deadly herbicide. He was rushed by his family to the KHMH from Cayo, but he died about 3:00 yesterday afternoon, about five hours after his daughter died. Police believe that Ricardo Tepaz was intoxicated when he drank the herbicide.

How do the Tepaz family survivors deal with the double devastation of losing two immediate family members in such cruel ways? Our prayers go with them.