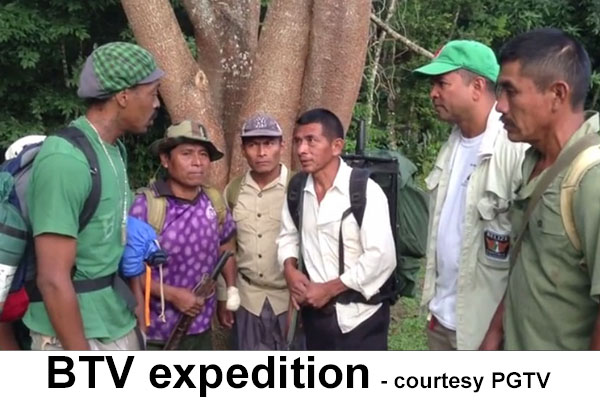 The Belize Territorial Volunteers (BTV) are today on an expedition to the Columbia River Forest Reserve—a tropical rainforest covering 103,000 acres and said to be one of the largest tracts of undisturbed rainforest in Central America—after reports of increasing incursions by Guatemalans believed to be engaged in illegal logging of mahogany, rosewood and cedar in the south.

At the Chiquibul Symposium held last July, Forestry Minister Lisel Alamilla said in her presentation that Belize is being threatened from north to south, within coastal and marine areas as well as on land. She cited difficulties being experienced with the protection of the Columbia River Forest Reserve, which, she said, “nobody manages.”

“It is supposed to be managed by the Forestry Department, but we don’t have the money to manage it,” Alamilla said, pointing to concerns that the incursions are being made even further inland, and affecting the Bladen Nature Reserve – which she described as “the Crown Jewel of Belize’s protected areas.”

But today, BTV’s focus is on the Columbia River Forest Reserve – that largely unwatched forest that is now the subject of increased pillaging.

Alamilla had indicated that the threats to Belize’s protected areas come from within and without, and she noted that there are 11 villages surrounding the Columbia River Forest Reserve.

Accompanying the BTV today to assist with the fact-finding mission was Valentino Tzub, who told KREM’s Perry Smith that they were heading to Edwards Central and then Union Camp, as they try to ascertain the extent of continuing incursions in the area.

Last week, the Sarstoon Temash Institute of Indigenous Management (SATIIM) reported to Amandala that some of its rangers on patrol, without Belize Defence Force support, had come across illegal loggers who had a well-organized logging and lumber-making operation within the Sarstoon Temash National Park. The culprits, said SATIIM, made good their escape to Guatemala. (See story elsewhere in this edition of Amandala.)

Last week, PGTV reported on the sighting of Guatemalan xatéros in the area of the Columbia River Forest Reserve, and that has sparked this week’s assessment of the incursions.

“This morning at 5:00 a.m. the BTV Elite Jungle Team left PG via San Jose on their way deep into the Colombia Forest, where the rape of our natural resources continues to take place. Please keep them in your prayers, as they monitor the Belize borderline!” BTV’s founder Wil Maheia said.

Maheia told us today that trade union reps have indicated that they also want to be engaged in the effort to address the expanding incursions.