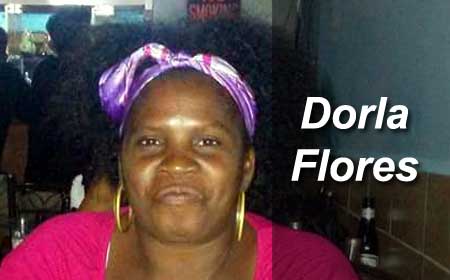 SEINE BIGHT, Stann Creek District, Thurs. July 20, 2017–At about 6:30 this morning, a Silverado F 350 pickup, being driven at the time by Obed Isaac Mojano, 19, a driver of Blackman Eddy, Cayo District, on its way to Placencia, on the Placencia Road, hit two women and a man who were standing on the road near the Cultural Center in Seine Bight.

Mojano apparently lost control of the pickup, which then slammed into a lamppost, breaking it, but the post stopped its forward movement.

All three were taken to the Placencia Polyclinic, where Dorla Flores was declared dead on arrival, and Arzu and Augustine were admitted for treatment.

Police have detained Mojano pending investigation. Blood samples were taken from him, and he may be charged with causing death by careless conduct for the death of Dorla Flores, among other charges.