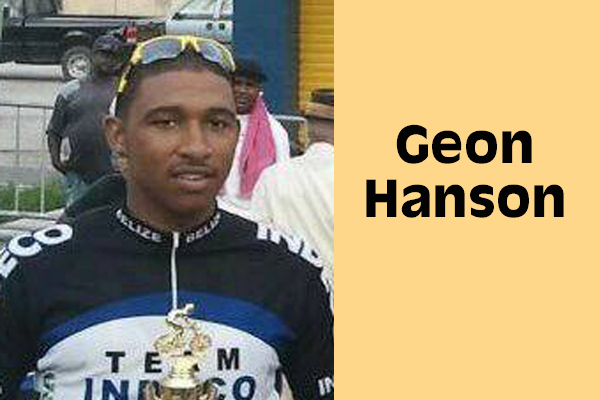 Following a traffic mishap blamed on the indiscriminate use of high-beam lights and on wet road conditions, a promising young cyclist suffered 8 broken ribs and had to have his spleen removed after he was knocked down by a bus near St. Matthew’s Village on the George Price Highway. The young cyclist, 22-year-old Geon Hanson, was training for the KREM New Year’s Day Cycling Classic.

The Belmopan resident was found on the side of the highway, between miles 36 and 37, at around 6:15 a.m. last Tuesday, December 24, 2013, after he was unfortunately knocked down by a J & J commuter bus, traveling in the same direction.

According to Saul Castellanos, the bus driver, he was eastbound when the lights of an oncoming vehicle temporarily blinded him. He said that when he regained his sight, he saw the cyclist in his path and tried to avoid hitting him but wet road conditions compounded the problem, causing him to hit Hanson.

Hanson, whose lungs had collapsed, was subsequently transported in an unconscious state to the Western Regional Hospital in Belmopan, where he underwent an emergency surgery to remove his spleen. He was later transported to the KHMH in Belize City for another emergency surgery.

Since then, Hanson’s condition has reportedly been steadily improving. His relative and fellow cyclist, Steven Bissett, has been providing regular updates on his condition via KREM’s WUB Morning Vibes.

Bissett said last Friday morning, “He (Geon) is still on the ventilator; his vitals are stable, which is very good news for us. He continues to battle very hard and we are very positive, and we want to tell everybody to please keep praying for him, and we know that it is going to be a long road to recovery, but with God’s blessing, he should be okay.”

This past Sunday, December 29, on the “Press” Cadogan Sports Show on KREM, cycling aficionado Kwame Scott provided an initial update on Hanson’s condition.

Scott said, “The CAT scans that he took yesterday (Saturday) revealed that Hanson had 8 broken ribs, a hairline fracture on his spine and other injuries; but the good news is that he is recovering and responding [to stimuli] although he is unable to talk.”

Steven Bissett then telephoned into the Cadogan Sports Show saying, “As of this [Sunday] morning, the doctors are saying that his vitals are very strong, which is a very good sign… and hopefully by this evening we will be able to take him off the respirator altogether. All signs are positive, although he is still in a critical condition.

Geon Hanson is presently a member of the Capital City Cycling Club and has been a competitive cyclist for the past 6 years.

He is also a graduate of the University of Belize and is scheduled to pursue a Master’s degree overseas in January on a full-scholarship.

According to Commander of the Belmopan Police Formation, Assistant Superintendent of Police Sinquest Martinez, the incident is currently under investigation and the driver of the bus has been served with a notice of intended prosecution.