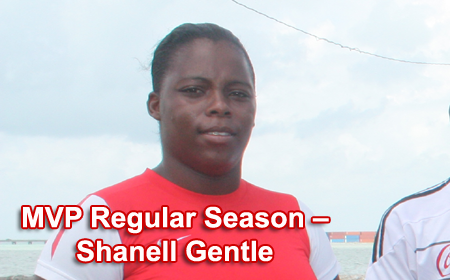 BELIZE CITY–After drawing 1-1 with DFC Gentle Touch of Esperanza, Cayo, in game 1 of the best-of-2 games series for the Football Federation of Belize (FFB) Women President’s Cup championship at the Isidoro Beaton Stadium on Saturday, November 15, Triple B’s, who are the defending national women champions, travelled to the Norman Broaster Stadium on Saturday, November 23, for the deciding game 2, and they returned to Belmopan with a 1-nil victory and the championship.

Home standing DFC Gentle Touch had an opportunity to go ahead in the first half, but striker Abby Halliday failed to convert from the penalty spot. The game remained scoreless until late in second half, when it was Triple B’s turn to be awarded a penalty, and Yamili Herrera (86’ PK) made it count to give her team the 1-nil lead, which they held onto until the long whistle for the championship.

Triple B’s was the defending national female champions, although this was the first year of the FFB Women President’s Cup. Last year, Triple B’s defeated Ladyville Jaguars in the finals to claim the FFB’s Atlantic Bank Female Football Championship 2013.

According to the FFB release on Monday, November 24, the awardees for the FFB Women President’s Cup 2014 are: