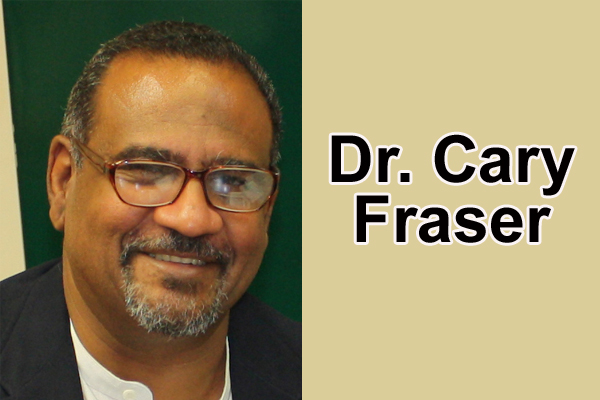 Tonight, the leadership of the University of Belize (UB) hangs in the balance after its president, Guyanese national Dr. Cary Frazer, went “off the radar” – so to speak – subsequent to alleging to Prime Minister Dean Barrow in a letter that the UB Board of Trustees has “micromanaged” the university, which he believes has restricted his leadership.

Today, Amandala has confirmed that Dr. Cary Fraser is officially on leave for reasons unknown. The confirmation was made by the Chairman of the Board of Trustees, Harrison Pilgrim. When KREM News asked the reason for the president’s leave, Pilgrim responded that he was not aware that there had to be a reason for going on leave.

When he was asked how long the president will be on leave, Pilgrim responded that it was an administrative issue.

During the president’s absence, the Interim Provost, Dr. Wilma Wright, will hold over.

Earlier this month, rumors were rampant that Dr. Cary Fraser had resigned from his post. It turned out that Dr. Fraser had written to the Prime Minister to say that he would be leaving the institution at the end of the academic year 2013/2014. He is expected to remain in office until the end of this current school year, which ends in May 2014.

Until that time, the Board will be going through the painstaking process of finding a suitable replacement for him. Dr. Frazer reportedly indicated that he had plans to develop the institution to meet the national needs for education, but the “chronic inability” of the Ministry of Education to meet its debts to UB is an apparent sign of the low level of priority that the Government has placed on the university. He added that the budget negotiations for the 2013-2014 academic year do not give him confidence that the situation will change.

In the letter, Fraser also criticized the Board of Trustees for its micromanagement of the institution, and stated that “Board intervention in operational issues has undermined the capacity of the University of Belize to foster institutional stability at leadership levels.”

Apart from the micromanagement allegations which he brought against the Board, Dr. Frazer explained that having worked at tertiary institutions in Europe, the Caribbean and North America, he believes that the type of management that the Board of Trustees has used so far has caused leadership instabilities in relation to the posts of Provost and President.

Fraser has not been available for interviews. The only formal correspondence coming to the media from Fraser’s office was an e-mail on November 13, in which he laid out the terms and conditions of his contract with the University of Belize, and indicated that, “I have written to the Prime Minister to clarify certain issues with him and will seek a meeting with him upon his return.”

Then last Thursday, the Board of Trustees of the University of Belize held a press conference at the Belmopan campus to address the issue of Fraser’s abrupt departure; however, not much was divulged in regards to exactly why the president is leaving, and Fraser was in fact not even present at the conference. What was disclosed is that there appears to be serious animosity between the Board of Trustees and the faculty, who were also at the press conference, and who voiced concerns stating that they have been left out of the decision-making process.

In reference to the possible departure of Dr. Fraser, UB Board Chairman, Harrison Pilgrim said, “On November 1st of this year – that is 13 days ago – the president announced at the commencement of a board meeting, that he was considering an appointment that would take him away from the university, and that if he decided to accept that offer, he would be leaving the University of Belize by mid’2014. On November 6, the president wrote to the Prime Minister of Belize and advised him that ‘I have made the decision that I will leave the University of Belize at the end of the current academic year.’”

The Chairman declared, “I am not aware of the underlying reasons which may have prompted the president to tender his resignation or to give an indication as to why he would resign at this time.” He stated that the Board subsequently met with the president to try and ascertain the reasons for his decision.

CEO in the Office of the Prime Minister Audrey Wallace told KREM News today that PM Barrow will return to office on Monday, November 25, after which it is expected that he will respond to Dr. Fraser’s letter.