Home Headline UB staff demonstrate – “no confidence” in Board of Trustees!
Headline

UB staff demonstrate – “no confidence” in Board of Trustees! 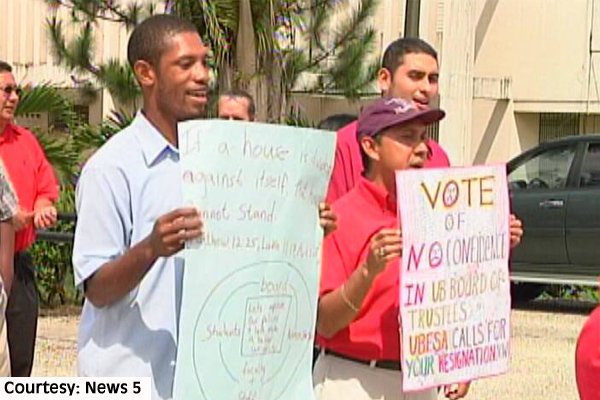 Students and lecturers register discontent with inaction about Payroll Audit Report, which reveals a number of “financial and managerial irregularities”

Two weeks ago it was the students of the University of Belize who were protesting in Belmopan what they consider to be an unwarranted increase in their fees.

Today it was the lecturers and staff members of the national university who felt they had reason to protest. Sixty of them today expressed their discontent on the university’s central campus in Belmopan, carrying placards that read “Vote of no confidence in the UB Board of Trustees” and “Mr. President, join us in the call for an Independent Commission.”

At issue is what is called a Payroll Audit Report, commissioned by the president of the university, Dr. Cary Fraser, and done by the auditing firm of Castillo, Sanchez and Burrell. The audit was commissioned sometime last year, and was to cover the period 2010 to 2011.

UB’s faculty and staff contend that the audit reveals a number of “financial and managerial irregularities.” They say that the audit is being “investigated” by a sub-committee of the university’s Board of Trustees called the Administration Sub-Committee. And that, they say, is a conflict of interest, especially since several Board members are implicated in the audit.

According to the interim president of UB’s Faculty and Staff Association, Allison Crawford, things did not have to reach this point. She says she wrote on behalf of the association to both Minister of Education Patrick Faber and Prime Minister Dean Barrow in December of last year requesting that they intervene into the matter, and in the case of the Prime Minister, for him to set up an impartial and external independent commission to investigate the audit report.

Crawford says that to date they have not received a reply to either letter, and they consider that to be “total disrespect for the faculty and staff of this national university of Belize.”

The Board of Trustees, for its part, sent out a release this afternoon saying that they “intend to respond to all the allegations and claims being made against” them.

“We will not be hasty in our response to these very spurious and defamatory allegations, as we need to follow due process.

“The Board has been consulting on its response to these issues and assures the media and the general public that they will be hearing in full from the Board of Trustees,” concludes the release.

And while a number of faculty and staff did not show up today for fear of reprisals, says Crawford, the Association is planning a sickout for Monday, February 18, of all their members on all the campuses of the national university. And after that, they will explore their options.

“All we want is an independent commission into the audit report,” says the longtime lecturer, who originally taught at the Belize Technical College before it was amalgamated with four other tertiary level institutions in August of 2000 to become the national university of Belize.