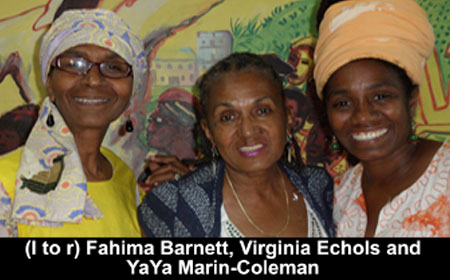 BELIZE CITY, Wed. Feb. 11, 2015–Tomorrow, Thursday, February 12, the Library of African and Indian Studies, located on the Kremandala compound at 3304 Partridge Street, Belize City, celebrates its 15th year in existence, having primarily served, since its inception, youth of Belize who cherish it as an invaluable asset in their quest to reconnect with their past and to establish in themselves a deeper sense of identity.

Established by the UBAD Educational Foundation (UEF), the library brings to life the vision of the late Dr. Leroy Taegar, who was also instrumental is ensuring that this vision became a reality.

Virginia Echols, an active member of the UEF for the past 15 years, said: “We’ve had our ups and downs; however, the purpose of the library is to benefit the community, and we have been steadfast in offering that space to the community.”

She said that 46 years ago, a group called the United Black Association for Development (UBAD) had a vision and it was the people in the community who helped them to partially fulfill that vision, and she noted that these members of the community are the ones who got Amandala started. The library is asking for that same community support, she appealed.

“That’s why our theme for this year is UJIMA – which is the kwanzaa principle, meaning collective work and responsibility, meaning that it’s our responsibility to collectively help our youth. The library is primarily for youth – the literacy program – we do so many things there,” Echols explained.

She said that Dr. Leroy Taegar and Lillette (Nzinga) Barkley-Waite shared that vision for the library, and Edgar X Richardson and Rufus X built it. The resources came from Dr. Taegar, and Kremandala provided the space, she added.

Echols explained how she got involved with the UEF. She said that she first met Norman Neal, who introduced her to Dickie Bradley, who introduced her to Evan X Hyde, and then she was introduced to Nzinga. Echols has been involved with the library ever since, and she was tasked from its outset with overseeing the operational management of the library. She is also actively engaged with the women’s and youth groups: the Mattie Roter Women’s Group and the Kwanzaa Club.

This past Monday marked 46 years since the founding of UBAD, which saw its genesis on February 9, 1969, and on March 10, 2015, UEF will celebrate its 19th anniversary. Last January, the Dr. Leroy Taegar Institute of Learning was formed as an education arm of UEF. The institute, as well as the Literacy and Numeracy Program, held in collaboration with RESTORE Belize, are housed at the library.

YaYa Marin-Coleman, chairman of UEF for the past 6 years, shared a wish list for the library. On that list are a laptop, a 3-1 scanner, printer and copier for the computer, a television, a DVD, a PA system, and a VHS player.

The group says that these will aid programs, especially geared at providing educational support to children.

Fahima Barnett, who also has a long history of involvement with the group, said that she is glad to be back after 10 years. She now works at the library in the afternoons, from 3:00 p.m. to 7:00 p.m.

She, too, is concerned about the plight of our youth: “Certain things have to happen so that we can see a change in our society and a lot of the things that were happening back in those [UBAD] days are still happening now: hunger, lack of proper housing and decent parks in their immediate community on the Southside,” she shared.

Barnett said that youths who lack a sense of self-worth need to be inspired to realize that there is significance in their being alive.

The UEF holds monthly fundraiser events, and in 2014, they began holding a monthly poetry and music show, organized by Echols. The next installment of that show will be held Friday evening at Spoonaz Cafe.

Marin-Coleman said that UEF is celebrating another milestone with her appointment as the secretary of communications for the Central American Black Organization (CABO). Emergent Corp and UEF are responsible for organizing the CABO Youth Summit slated to be held in Belize from July 17-19, 2015.

She said they are looking forward to leading a series of political education discussions in 2015.

“We see that there is a need for that, so that is something we are working on,” Marin-Coleman said.

Also, Amber Rivero, a business management student of the University of Belize, will be joining the library for a 9-week internship.