Home Headline A UDP show of strength for Tuesday!
Headline

A UDP show of strength for Tuesday! 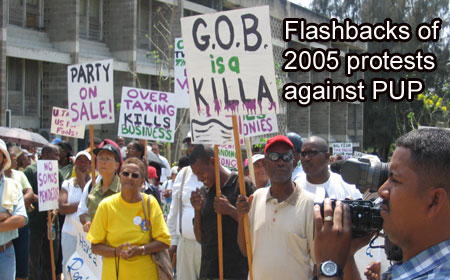 The ruling United Democratic Party (UDP) apparently intends to flex its multi-million-dollar muscle tomorrow, Tuesday, in mobilizing what it says could be the biggest throng of demonstrators ever on Independence Hill in what it anticipates will be an unprecedented turnout for or against any national issue.

“If you need to amass 10,000 people and spend $2.2 mil on ads [attacking the PUP], just because we are asking the Government to be accountable, transparent and give good governance, that shows you that something is wrong,” said Julius Espat, Cayo South area representative for the Opposition People’s United Party (PUP), who recently filed a Supreme Court motion challenging the Government on the PetroCaribe agreement and spending.

Last month the UDP introduced a $228 million loan motion for financing under the PetroCaribe initiative with Venezuela – the largest such motion since the refinancing of the Super-bond in 2013.

Espat, a deputy leader of the PUP, told Amandala that the Opposition is not mobilizing supporters for tomorrow’s House meeting. He told us they have received reports that the UDP is paying $200 a head to persons to attend the rally, which would translate to $2 million in payouts in the hands of demonstrators, apart from transportation and food expenses.

“We don’t believe in that concept. We are taking nobody except our regular people that go every time,” said Espat.

“If I had 228 million to spend on demonstrating, I would be expecting a lot of people,” said Espat.

“The people obviously can see and do see all the development the government is providing – a great portion of which is being funded by the PetroCaribe money,” said Prime Minister and Minister of Finance Dean Barrow, Leader of the UDP.

He described the PUP’s attempt to stop the PetroCaribe spending, via court injunction, as “a scorched earth policy,” and an attempt to “stop something that is affecting and impacting the lives of people in such a positive way.”

Barrow told us that he is certainly not expecting fewer than 6,000 people, but he “fully expects more and considerably more.”

“I am willing to wager that this will be the biggest crowd seen” on Independence Hill, Barrow said, even bigger than the masses that flocked in protest against the PUP administration back in 2005.

Barrow said that they are heading to Belmopan, not in order to support the UDP, but because they understand the issue – that the projects funded by the program have meant that many people who were unemployed now have jobs. He said that the effort is being financed by the party. We pointed to inevitable allegations that tomorrow’s rally and demonstration is being funded with government money, but Barrow said that not even the PUP would be able to pull off anything like that, since everything has to go through the Treasury.

“We have raised money, so the banks will be able to tell you we’ve been depositing funds like crazy,” he told us.

He would not disclose the cost of mobilizing supporters for Tuesday’s rally.

Espat contends that despite the UDP’s plan to flex on Independence Hill tomorrow, the motion which the ruling party intends to pass in Parliament tomorrow, as well as the supplementary appropriation bills to cover spending under the PetroCaribe program, remain “unlawful” – a matter which he said he will continue to pursue in the Supreme Court.

Barrow also conceded that he would be introducing two supplementary bills for approval ex post facto, but  added that this is “quite a regular and well-used feature of our parliamentary process” to cover overspending.

Included in the spending, Espat said, are the Mother’s Day fund for $1 million and constituency assistance given only to the 17 UDP constituencies, which he deems to be an unlawful use of funds for political purposes.

He said that there would not need to be a forensic audit had the funds been equitably distributed, and suggested that the funds could be used to reduce pump prices for fuel to $7 a gallon.

Barrow said that while $70 million from the $228 million received in financing through PetroCaribe has already been spent, much of the remainder, which is on deposit at the Central Bank of Belize, has been earmarked for projects such as the construction of a new civic center in Belize City, as well as renovations to the Isidoro Beaton Stadium in Belmopan and the multipurpose center in Punta Gorda.

“We are also very conscious that there is need for a kind of rainy day fund,” he added.

He also said that they are storing up what the Government will need to pay Michael Ashcroft and Fortis in compensation for the nationalization of Belize Telemedia Limited and the Belize Electricity Limited, respectively, which are still in litigation at the Caribbean Court of Justice. Case management sessions are planned for November 28, 2014.

Meanwhile, the Supreme Court has yet to set a date for hearing Espat’s claim against the Barrow administration over the PetroCaribe spending.

“If they have any sense, once the thing is passed [by Parliament], they would back off,” said Barrow.

However, Espat told us that he has no plans to back down, and he insists that the Barrow administration continues to act unlawfully in the manner in which it is presenting the motion and bills to the House, in the face of clear provisions in the law that set out the requirements.

“All men are equal under the law. That is the only thing that makes all men equal: the monarch as equal as the man that digs the drain,” Espat said, insisting that his claim is in furtherance of good governance from an administration which he says refuses to demonstrate accountability and transparency.

He said that to his knowledge, the PUP has not asked for a protest permit.

“Pretty much every single bus has in fact been hired by the UDP, and if the PUP wants to come, they will have to come by mule and cart,” he jested.