UDP takes back the South! 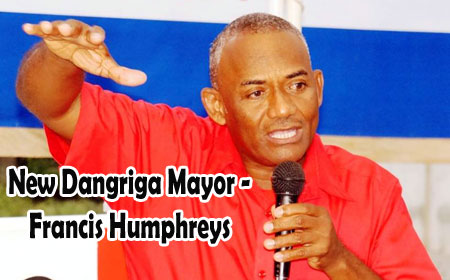 DANGRIGA, Thurs. Mar. 5, 2015–The UDP candidate for the mayoral race in Dangriga, Francis Humphreys, a teacher, historian and educator, is now the new mayor of the “Culture Capital” of the Jewel after besting his past student and opponent, Greg Ovado, who was contesting the race for the PUP.

In the midst of a huge, celebrating crowd, Humphreys was declared the new mayor of Dangriga at about 2:00 this morning at the BTL Princess Royal Park in Dangriga. The announcement came at the conclusion of the counting of the votes that were cast in the Municipal Election 2015 in Dangriga for the selection of a new mayor and a slate of councilors to administrate the town for the next 3 years.

After he was declared mayor, Humphreys made a victory speech to the huge, hyped-up crowd on the steps of the Town Hall.

In his speech, the new mayor said that he and the people will work to transform Dangriga and to make it the true Culture Capital of Belize. He said he will also work for a higher standard of living for the people, and added that he and his team will work to bring to fruition what they indicated they would do in their manifesto.

The new mayor said that without the help of Frank “Papa” Mena and their team of campaigners, the victory would not have been possible.

After the short victory speech, the energized crowd began a victory parade through the streets at about 2:30 this morning.

The popular Sweet Pain Band was belting out its popular music to the energized crowd. The band was in a truck, and the partying crowd was dancing behind the truck. About 30 vehicles took part in the victory parade.

The parade made its way to the UDP Headquarters on St. Vincent Street, where the crowd continued the celebration.

The large crowd of about 450 people had converged near the Town Hall at the BTL Princess Royal Park, and waited patiently as the ballots were counted at the Town Hall, which was the counting station. The counting of ballots began at about 8:30 p.m. and at about 10:00, news began to filter out that the UDP was clearly leading.

At about 11:00 p.m., there was a visible absence of PUP members in the park area and when updates were transmitted to the awaiting crowd, horns blared and there were loud applauses.

However, it did not go well for PUP supporters in their blue shirts. Those who were spotted were jeered by the crowd, and laughed at.

At about 1:30 when it became evident that Humphreys was the clear winner, the crowd began to demand that the new mayor come down to them.

At about 1:45 this morning, a man came down from the Town Hall to make the official announcement of the result of the election, declaring Humphreys the winner and the new mayor.

Shortly after, the new mayor came down the stairs, flanked by the newly elected councilors, and Frank “Papa” Mena, who introduced the new mayor, and the crowd rushed to greet him and celebrate the victory.

It’s worth noting that the election in Dangriga had a low voter turnout, and John Avila, a campaign official for the UDP, told Amandala that the PUP did a poor job of bringing out their supporters.

Avila also said that the people were discontented with their mayor, and decided not to vote.

The residents of Dangriga, however are expecting more development in the town, the concreting of streets, and an improved life standard due to the newly installed UDP Town Council, which is in line with the UDP central government’s objectives.

Further south, history was made in Punta Gorda when a UDP slate of councilors and the first female mayor for that town – Fern Gutierrez of the UDP – were elected into office. She bested the incumbent mayor, Anthony Fuentes, of the PUP.

Supporters of the UDP in Punta Gorda told Amandala that the slate backing Gutierrez was young and dynamic, and the youths were bent on giving her a chance. Also, women, who were the majority, predominantly voted for her.

In an interview with reporters, Gutierrez said that she had campaigned by visiting the people and talking to them, and giving her pledges.

When Amandala asked former Mayor Fuentes about his defeat, he said that they could have done much more for PG residents if the PUP were in control of the central government, but against all odds, he had carried out development in the town.

Wil Mejia, mayoral candidate for the PNP (People’s National Party) and leader of the Territorial Volunteers of Belize, during the polling, had said that he was confident that the people were now ready for a new party, and that after the day was over, their party, the PNP, would no longer be the third party. He said that the people had pledged their support to his party and were bringing out the voters.

Hon. Godwin Hulse, who was in Punta Gorda observing the elections, on the other hand, had told Amandala that all was going well for the UDP, that the machinery was working and that he was guardedly optimistic.