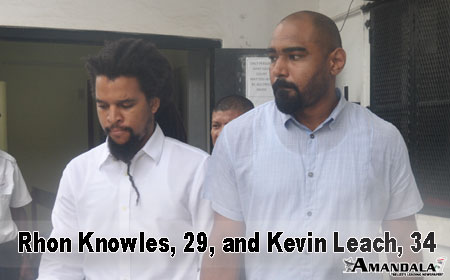 BELIZE CITY–Two Bahamian nationals for whom the US Southern District Court in New York has issued an indictment for money laundering, tax evasion and securities fraud, were arraigned in the Belize City Magistrate’s Court on a charge of “failure to declare funds when leaving Belize” by the Financial Intelligence Unit (FIU) this morning.

The men were released on bail, but before they left the courtroom to sign the bail release forms, they were rearrested by police on the strength of a provisional arrest warrant pending an extradition request from the United States.

In the matter of the FIU charges, the two accused men, Rhon Knowles, 29, and Kevin Leach, 34, who are residents at the Renaissance Towers in the Newtown Barracks area of Belize City,  pleaded not guilty to one count each of “failure to declare funds when leaving Belize” when they appeared before Magistrate Dale Cayetano.

The court prosecutor objected to bail on the grounds that the accused men are flight risks and if granted bail, they will most likely flee from the jurisdiction of the court.

Attorney Godfrey Smith, S.C., who represented the two men, told the court that his clients have no intention of fleeing from Belize.

“The offense for which they are charged is punishable with a fine and/or term of imprisonment not exceeding two years. So it is our respectful submission that they are entitled to bail,” Smith told the court.

After Smith’s submission, there was no further objection from the prosecutor in respect of bail.

Cayetano, however, offered them bail of $7,000 plus two sureties, on the condition that the men surrender their passports.

Smith, however, told the court that he was not objecting to the conditions of the bail, but he noted, “I must point out that it is a redundancy to ask my clients to surrender their passports, because their passports have already been taken away by the FIU.”

When asked for an adjournment date, the prosecutor stated that it would be September 30.

“Why do they need such a long adjournment date?” Smith asked.

“It is a trifling offense with a mere $2,000 over the FIU’s amount to leave the country with,” Smith argued, pointing out that relatives of the accused men have made the trip to Belize from the Bahamas at tremendous expense.

“Your Honor, I know the expertise that is at their disposal and the considerable help that they are getting from the Americans. They are instruments of foreign governments,” Smith told the court, in reference to the legal case being made, via the FIU and the local prosecutor on behalf of the Belizean government, against the men.

Cayetano pointed out to Smith that the law provides for 14 days for disclosure to be given.

Smith shot back, telling the court that he is prepared to “forfeit disclosure and deal with it on my feet.”

In the end, Magistrate Cayetano adjourned the matter to Wednesday, September 24.

The FIU charge against the two Bahamians came about on Friday afternoon, September 12, when they were intercepted at the Philip Goldson International Airport (PGIA) just as they were about to board a private charter flight to Cancun, Mexico.

Following the arraignment, Smith told reporters, “After we successfully applied for bail and the Magistrate granted bail under the usual condition that they present themselves once a week to the police, we were presented with a warrant under the extradition proceedings.”

“What we got bail for this morning was for the trumped up charge of failing to declare currencies over a certain amount, which we always maintain was a stalling tactic to buy time for the extradition request to come,” said Smith.

“So as soon as they were granted bail, the warrant for their apprehension, signed by the Magistrate, was issued,” Smith explained.

Smith said that on Friday, the men went very openly to the PGIA, because they had made checks at the Ministry of Foreign Affairs to see if there were any impediments to their travelling, because they were not fleeing.

“Before they were given any chance to declare anything, before they had the opportunity to approach any authority and say, look, we have certain cash here, they were grabbed, detained and searched, but the money wasn’t hidden,” Smith stated.

Smith said that the next set of proceedings will be the extradition proceedings.

“In relation to the extradition proceedings, we haven’t seen any details of that yet,” said Smith, “I believe that Belize is the instrument of the United States in relation to this particular case.”

Last week, Belize law enforcement officials, with the assistance of US agents, raided the fourth floor of the Matalon Building, where Titan International Securities was located. All of the offshore company’s computer equipment was taken and the business was closed down after indictments were issued in the United States for key employees of Titan International.

While none of the others connected to Titan International  have been arrested, the two Bahamians who are in custody constitute the first sign that the United States will issue extradition requests to the Belize Government for other Titan officials who have been accused of a massive fraud involving US$500 million.