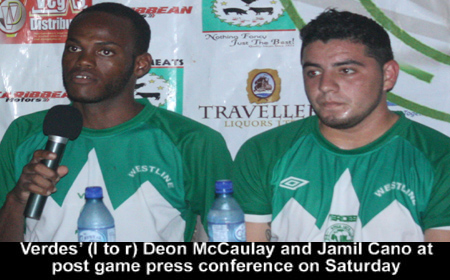 Both national champs Verdes FC and the Belize National “A” Team are preparing for tough international competition in the coming weeks. Verdes FC has a Champions League date with Mexico’s Queretaro FC at the FFB Stadium on August 18; and Belize National “A” Team has started training for 4th and 8th September dates in World Cup 2018 Qualifiers against an opponent to be decided in this coming Saturday’s draw in Russia. Belize’s national team goalkeeper Shane Moody Orio is presently on contract with CD Suchi, who are ranked third in Guatemala’s top professional division, in which Shane was recently selected best goalkeeper. Shane accompanied his Guatemalan team, but, due to a knee injury suffered two weeks ago, he did not participate in any of the games.

In the game on Saturday, Verdes showcased some new recruits, including rookies Jahron Myvette and Darroll Lambey, as well as Trinidadian Oswin Williams, and most notably, Belize’s all time international scoring leader, Deon McCaulay, who joined the action in second half. In a fairly evenly contested match, Verdes got the game winner from second half substitute Jamil Cano, who penetrated the middle of Suchi’s defence to slap in a high centering pass from right midfielder Ricardo “Cheety” Jimenez just 4 minutes before the long whistle.

Notably missing from the Verdes roster were promising talent Gilroy “Bredda” Thurton, who reportedly has some personal issues to work out, and recent PLB Playoff MVP Jarret Davis, who is on two weeks doctor advised rest due to a strained leg muscle.

Suchi’s biggest threat on Verdes’ goal came late in first half, when midfielder Darroll Lambey attempted to clear a hard cross goal pass from the Suchi left winger, and Lambey’s touch sent the ball high toward the corner, requiring a spectacular diving save from his own goalie, Benito Moreira, to avoid a 1-nil Suchi lead.

Despite starting with some rookies, Verdes proved they could hold their own with the fully professional Suchi, and with their addition of established stars, Evral Trapp, Ricardo “Cheety” Jimenez and Deon McCaulay in second half, they began to take more command of the game.

Of interest to local fans also, Deon will now be with Verdes for the upcoming PLB tournament, aside from appearing with them in their Champions League matches, while also leading the National Team in World Cup Qualifiers in early September. Between the conflicting schedules of training and playing with both Verdes and the National Team, we hope that Deon’s team managements can coordinate things to help him avoid injury in the action packed weeks ahead.

On Sunday, the National “A” Team established dominance early on the way to a 4-2 win, despite missing a few regular starters. By half time the score was already 3-0, and the desperate Suchi coaching staff had already made 3 substitutions to try and contain the onslaught. Deon converted from the penalty spot (18’) after Danny’s overhead pass saw him with an open goal, before being pushed from behind by a Suchi defender. Deon’s next strike at the 22nd minute was a beauty, as he slid in hard to tip in a powerful grounder from the left wing by Elroy “Bibbs” Kuylen. Goal #3 saw Harrison “Cafu” Roches (27’) with too much speed for the Suchi right defender, as Cafu easily beat him to a long upfield pass on the left wing, and made no mistake blasting it past the oncoming goalie.

Coach Jorge Nunez began shared the playing time early in second half, and rookie entrant Gabriel Perez (63’) made it 4-nil, after his shot at goal deflected off a Suchi defender. Another Belize rookie, Dorwin Logan was impressive in attack, displaying a powerful right foot shot from 30 yards out that just sailed over the cross bar. After more substitutions by Belize, the game got a bit scrappy, and Suchi got a couple goals, one a penalty, converted by #11 Cristian Flores (72’), and the other by #2 Kevin Ruiz (77’) from a direct kick just outside the eighteen that deflected off a player in the wall.

All in all, it was a good outing for the Belize National “A” Team, who should now be looking to some tougher opponents.

(Note: Game details above are from our unofficial stats.)