Home Features Did the US weather service have any impact on Hattie hitting Belize...
Features

Did the US weather service have any impact on Hattie hitting Belize because of project storm fury ? 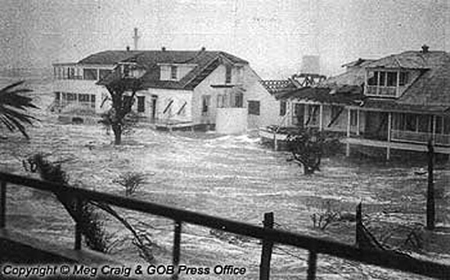 Today, October 31, 2017 will mark the 56th aniversary of one of the most destructive hurricanes that ever made landfall in Belize – Hurricane Hattie. The great mystery about Hattie according to historical records is that Hurricane Hattie had actually headed past Belize to Cuba, in late October of 1961, but mysteriously took a turn towards Belize. Hattie ran into cool air which essentially had the effect of reversing its direction from north to south.

“In 1961, we Belizeans were not as confident in the predictions of the weather scientists in Miami, because this was a time when we were hearing of their silver iodide experiments on seeding hurricanes, and overall it seemed that the American scientists had decided to play with natural fire, so to speak. 55 years after Hattie, the weather scientists know a lot more than they did back then.” (courtesy of Amandala Publisher).

Thanks to the Publisher of the Amandala for sharing this theory about the silver iodide. I have decided to do a research. According to data this was the name of the experiment — Project Storm Fury.

“Project STORMFURY is a scientific experiment designed to explore the structure and dynamics of Western Atlantic tropical cyclones and the potential for their beneficial modification. The experiment began as a joint operation of the United States Weather Bureau and the Department of Defense (Navy). Initial experiments using silver iodide to seed a hurricane in 1961 were sufficiently encouraging that Project STORMFURY was formally organized by the Weather Bureau and the Navy. The project has continually evolved and is today an effort directed by the National Oceanic and Atmospheric Administration (NOAA) with cooperation from the National Aeronautics and Space Administration (NASA) and the National Science Foundation (NSF).”

The project was run by the United States Government from 1962 to 1983. The experimental areas for Project STORMFURY and the Hurricane Amelioration Research Project, as the currently planned operations are called, include portions of the western North Atlantic and the eastern North Pacific, respectively. The hypothesis was that the silver iodide would cause supercooled water in the storm to freeze, disrupting the inner structure of the hurricane. This led to the seeding of several Atlantic hurricanes.

Because the experiment lasted from 1962-1983 and Hattie made landfall in 1961, one may wonder how this affected Hattie. Further research shows that before 1962 when it officially began, they were already testing it in 1961. Four Atlantic hurricanes have been seeded since 1961 (curiously Hattie struck Belize on October 31st 1961: is this a coincidence? Was Hattie one of the hurricanes they experimented on?) with silver iodide crystals dispersed from aircraft with pyrotechnic devices developed by the U.S. Navy? The results were sufficiently promising in terms of reducing the peak hurricane winds that NOAA has made plans to expand the area of operations to include the eastern North Pacific so that the number of candidate hurricanes will be larger, thus providing more opportunities for seeding experiments.

The last experimental flight was flown in 1971, due to a lack of candidate storms and a changeover in NOAA’s fleet. More than a decade after the last modification experiment, Project STORMFURY was officially canceled. “Although a failure in its goal of reducing the destructiveness of hurricanes, Project STORMFURY was not without merit. The observational data and storm lifecycle research generated by STORMFURY helped improve meteorologists’ ability to forecast the movement and intensity of future hurricanes.”

Bottom line of this thesis is why did the United States was being so generous as to open its Immigration doors to Belizeans to come and live in their country? Was this like a “kinda sorry for you Belizeans” apology for making Hattie swing around with the experiment that went wrong? I wish someone who is a seasoned weather person would comment on this, weather people like former Met Officer Henry Gordon, Climate Change gurus Kenrick Leslie and Carlos Fuller, and our own present Met Officer Dennis Gonguez. I would love to hear their side of the story of Hattie. Or is this a secret that will go to the grave?