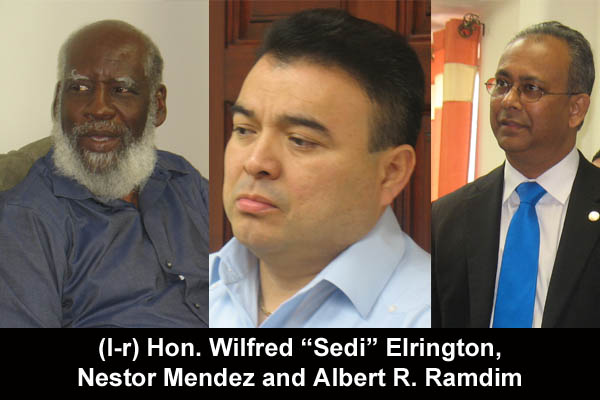 Belize Minister of Foreign Affairs Wilfred “Sedi” Elrington said during a press briefing this morning that the Belize delegation would walk out of the General Assembly of the Organization of American States (OAS) meeting to be held in Antigua, Guatemala, in June, if the country uses or broadcasts any offensive material against Belize, in relation to the pending territorial differendum.

Elrington made the comments right after he met with Albert R. Ramdim, the Surinamese who now holds the post of Assistant Secretary-General of the OAS, at Elrington’s Belize City office this morning, during what Elrington describes as “a periodic visit” with member countries.

7 News director Jules Vasquez asked Elrington how a Belize delegation would handle the situation, should Guatemala choose to display at the meeting of the OAS General Assembly in Antigua, Guatemala, this June, any map including Belize as part of their territory, as was done by the Guatemalan rep who played a preparatory video at an international OAS meeting earlier this year.

Elrington said that the last thing he told Ambassador Ramdim this morning is that this offense should not be repeated.

“Nothing offensive is supposed to be published or broadcast during the course of the OAS meeting. That is not to happen, and it is his [Ramdin’s] responsibility to ensure that it does not happen,” Elrington said.

Amandala asked: “And if it does?”

“We walk out! We register our protest, we walk out and we invite our friends and colleagues to do the same with us,” he replied.

Elrington said that no decision is taken by him, in relation to the Belize issue, that isn’t sanctioned by Government, including Prime Minister Dean Barrow.

“Everything that I say has got to meet the approval of the Cabinet and the Prime Minister. If that were not so, he would long have heeded to the call to have me removed, but he hasn’t done it yet,” the Foreign Minister commented.

He also said, “…we [the Ministry of Foreign Affairs] consult with all ambassadors who are in the centers of the capitals of the world” before putting their recommendations to PM Barrow and his Cabinet.

“It is only after that is done that we take a position to ensure that we are safe and secure,” Elrington told the press.

Belize would also continue to consolidate international support, but Elrington cautioned that “countries are not guided by friendship, but by their interest.”

He said that Belize would approach CARICOM, Commonwealth, SICA (The Central American Integration System), OAS, and all friends, to ask them to support Belize.

“We have historically worked as a bloc to prevent Guatemala from getting its way in these organizations,” said Elrington.

He noted that Trinidad and Tobago is just about to conclude a special trading arrangement with Guatemala, and these kinds of agreements can change dynamics between the parties.

He added that many countries are so intertwined now with South America that one cannot assume that the support Belize used to get will automatically be forthcoming.

On the question of the pending referendum in which voters in Belize as well as in Guatemala would be asked whether they agree to have the territorial differendum adjudicated by the International Court of Justice (ICJ), Elrington said that the stance taken by Guatemala suggests that they want a “yes” vote, so that the matter can be taken to the ICJ.

“The important thing to note from that is that their interest seems to be to get a ‘yes’ vote to go to the ICJ, which is very encouraging, certainly for me,” said Elrington, adding that he has always maintained that the ICJ is the best way to resolve the differendum.

Elrington said the Government of Belize is still awaiting an official reply, and in the interim, the Ministry of Foreign Affairs is putting together a roadmap for Belize, recommending the way forward.

He said that this weekend, almost all of Belize’s ambassadors are due to be in-country, so they can convene a meeting for them to help put together the roadmap for the Prime Minister. The minister added that the roadmap will not be disclosed until it gets the green light from Cabinet.

Guatemala has also recently proposed a new passport, which, officials have said should reflect the territorial differendum with Belize on its cover. A sample image shows Guatemala and Belize separated by a dotted line—not a clear border as international maps depict—in line with other offensive maps that have been popping up lately.

Our newspaper asked Elrington to comment on that issue and he told us that what the Guatemalans are doing is exactly what the Chinese did last year. There are, he said, in excess of 2,000 articles on the Internet showing the response of various countries– including India, Vietnam, Malaysia, Taiwan and others — to “the Chinese provocation” of including their territories as part of China.

India has done the same thing, showing part of China as belonging to India; the Vietnamese refuse to stamp the passport as issued by People’s Republic of China, but uses a separate paper to stamp visas, Elrington said.

“No country that is affected by this matter in the southeast China seas is contemplating withdrawing their business activities,” said Elrington, although, he said, some are handling it more quietly than others through “backroom diplomatic initiatives.”

“We in Belize, to my mind, have to be guided by what these more mature and experienced countries do,” Elrington said, adding that Belize cannot afford taking a “kneejerk” approach or taking on “positions that are inimical to our interests.”

Minister Elrington said that over the years, Belize has caused almost all its citrus and banana industries to be worked by Guatemalan migrants, and “a lot of others are kept alive because of the Guatemalans who live here…”

He spoke of a recent conversation with a Guatemalan, Raul, who Elrington said became worried after hearing a rumor that Guatemalans would be given five months to get out of Belize.

Elrington said that the last thing Belize would want to do is to tamper with the peace and harmony that exists between Belizeans and Guatemalans, and he advocates for legal and diplomatic channels that would cause the least discord. Belize cannot take actions without examining all the ramifications, and it has to make sure what it does is not harmful to the country and its people, he told the press.

Amandala asked Minister Elrington to address concerns raised by the Belize Territorial Volunteers (BTV) that Guatemalans have been allowed to pursue commercial agricultural developments right up to the Belize-Guatemala border, including an African palm plantation and an associated road, when a bi-national agreement between the parties says that all such activities should be halted for the time being, and when Belizeans have been told they cannot conduct similar activities near the border.

“I got no information from them [BTV], but I have gotten a protest from the Guatemalans advising us to do something about their activities. I think they’ll get themselves in trouble,” said Elrington.

Channel 5 News asked the minister to comment on the recent announcement that Guatemala would acquire six new light attack planes from Brazil. The bigger threat to Belize, Elrington said, are illegal activities by Guatemalans who log Belize’s forests illegally and who despoil the Maya ruins.

Elrington said that Guatemala already has “serious military hardware” and its armed forces will be 100 years old very shortly.

“They have been killing their people for over 30-odd years, continuously,” said Elrington, adding that Rigoberto Menchu came to prominence in consequence of that kind of activity.

According to Elrington, Belize has always been very mindful of Guatemala’s military capabilities; this is why, he said, he is concerned about the BTV’s activities which, he said, “is causing Guatemala some concern.”

As we reported last week, the Belize Territorial Volunteers has planned two major events to mark the signing of the 1859 Boundary Treaty by Britain and Guatemala 154 years ago, on April 30, 1859.

The BTV has announced that it will do a symbolic planting of Belize’s national tree, the mahogany, at Belize’s western border with Guatemala, as well as undertake a special visit to the Aguas Turbias border marker, where the name Belize is penciled in, but Mexico’s and Guatemala’s appear on metal plaques.

Amandala asked Minister Elrington to explain why there is no plaque for Belize, and he said that although the marker “…really should correspond with what is physically on the ground, as may be suggested, there may be some discrepancies on the ground. I don’t know.”

He did affirm, however, that the coordinates stipulated in the 1859 Boundary Treaty and reaffirmed in the 1931 Exchange of Notes between Britain and Guatemala are the points that depict where the border between Belize and Guatemala is located.