Western Eagles lost a loved one 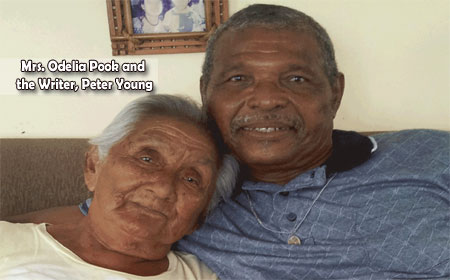 BELIZE CITY, Thurs. Sept. 22, 2016–Hello to one and all! There is not much happening in cricket at this time, except for a 20/20 being played among four teams from four villages in a fund raising effort. This Saturday, the games will be in Lords Bank. Teams taking part are Western Eagles, Wicked Eleven, Summer Fever and Sunrise.

My main point for this article is to pay respect to the Pook family of Rancho Dolores on the passing of their mother, grandmother, cousin and friend, Mrs. Odelia Pook. This humble lady was one of Western Eagles’ most silent fans. During games in Rancho, one would always see her sitting on her veranda enjoying her team do battle. She was a lady of few words, but she will hold a conversation with anyone who took the time out to do so. She was the mother of very good cricket players in the persons of Godfrey, Enfield and Wendell. A few of her grandchildren also play the sport and perform it exceptionally. This humble lady, without a doubt, was my dear friend. I have known her from my very young age. Since leaving Rancho and living in the city, I haven’t seen much of her often; but whenever I visited the village, I made a special effort to see and chat with her.

In the month of June, I visited Rancho and was told she is staying with one of her daughters in Bermudian Landing. I went there; we spoke and took a picture together. During our conversation, she said, “Walla, boy, I will not be with you all very long.” I asked her why. She said that she is not feeling too well, and believed that the Lord is ready for her. I tried to encourage her not to think that way, but she insisted on leaving.

I was very saddened to hear of her passing. I will always remember while growing up and attending school, I was the only one who could steal fruits and not get reported by her. I have always displayed respect to her and her family.

On behalf of myself and my family, our deepest and sincerest condolences go to her children. May God give you the much needed strength to overcome the pain of losing her. The part that should give you relief, is that you have had her for many years during her life to love and enjoy. Now, the Lord’s turn to have her has come. Jesus said, “I am the bread of life. He that cometh to me will never hunger, and he that believeth in me shall never thirst.” (John 6:35)

Miss Dilee, you will be missed by many. May your soul find eternal peace with God.