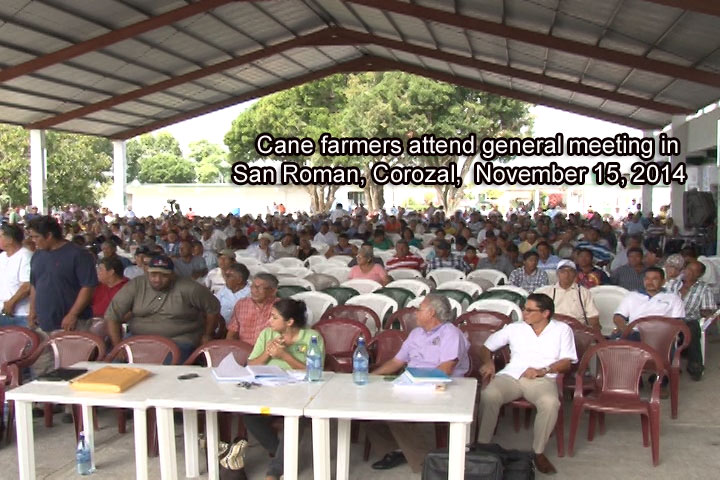 COROZAL–“The agreement that BSI/ASR has put forward has come to an end today!”

That was the sentiment among the members of the Belize Sugar Cane Farmers Association (BSCFA) after an emergency general meeting that was held with over 1,000 local cañeros this past Saturday, November 15, at the Escuela Secundaria High School Auditorium in San Roman, Corozal.

Our readers would know that the agreement being referred to is in the form of an unprecedented side-stepping move on the part of the factory owner, Belize Sugar Industries (BSI), and its parent company, American Sugar Refineries (ASR), a full-fledged multinational, to emasculate the 55-year-old cañeros association by attempting to get small reaping groups and individual farmers to sign contracts with them in hopes of heading off a late sugar crop season in the absence of a new commercial agreement between the cultivators and the millers.

Despite the association’s affirmation that no individual cañero has yet taken the bait, BSI/ASR has pressed on in its endeavor, and last Friday, November 14, the company issued two press releases, one in which they extended the consultation period for the farmers, and another in which they castigated the BSCFA and reiterated their reluctance to sign any interim agreement with the association, which represents an estimated 5,500 cane growers in northern Belize, saying that “it [an interim agreement] hasn’t worked before, and it won’t work now.”

After the BSCFA’s Committee of Management set the trend for an atmosphere of solidarity and vigilance on the part of the cañeros at the meeting on Saturday, the association’s attorney, Christopher Coye, outlined what is at stake.

“ASR wants to make an example of you to the world – challenge us and we will bury you. What example will you be? One that stood up together and demanded what is right and fair, or one that was divided, conquered, chewed [up] and spit out?”, he asked.

Several of the apprehensive cane farmers addressed the gathering thereafter, some of whom characterized the situation as “serious and dangerous”, and called on the Sugar Industry Control Board (SICB) to take charge of the matter within the next five working days in order for some sort of agreement to be reached.

Others condemned BSI/ASR’s “colonialist” techniques and encouraged the group to stand behind the association so as to maintain strength in numbers.

“We need another movement, another way for them to listen to us — BSI doesn’t want [to listen] and the Government already said, ‘find a solution yourselves, I’m not stepping in’, so we’re not moving forward. I think we need a demonstration. We need to go as cañeros, but all of us, to show the Government that we need their help against BSI because if not, there won’t be a crop. Let’s go to Belmopan and ask [Hon.] Dean Barrow what his position is. We need to work”, declared one cañero.

Shortly after, a motion was passed in favor of a demonstration which three quarters of the audience voted in support of, and none against.

That was followed by an appearance by former UDP Minister Gabriel Martinez, the present chairman of the SICB, who lauded the cañeros for sticking together, and made an important clarification in terms of a matter that had reached the rumor mill.

Martinez also later responded to queries from reporters about the BSCFA’s constant request to have a promised independent expert adjudicate the issue.

“It has always been the position of the SICB that both entities sit down around the table and negotiate the issue in a way that will benefit both parties and for the industry to go forward, but first I must assure everyone that we are pro-industry, and what matters most at this time and any other time is the benefit of the industry for all. The SICB is here to facilitate the process; we are calling a meeting, we are inviting all our stakeholders, and whatever comes out of that meeting is what we are going to recommend to the Government of Belize [GOB]”, he answered.

The SICB chairman noted that he will verify with other Board members today whether the meeting to discuss the developments in the industry can be held earlier.

There were also rumors that a group in the Corozal division was willing to sign BSI/ASR’s proposed agreement; however, a representative of the group assured that they have only submitted the agreement to an attorney and are awaiting a report in the next 3 to 4 days.

BSCFA Chief Executive Officer, Oscar Alonzo, discussed the main points of the session with the media when the meeting was ended, and stressed that if they need to protest to get the attention of the authorities, then they will do that.

“One of the resolutions is that the BSCFA and its members are prepared to start a crop and that an interim agreement be signed. This is an important resolution because it asks the SICB to act quickly on the request that had been made. One — that an independent expert be recruited to evaluate the two formulas for the payment of bagasse, and also to consider the request of the BSCFA where it says that it is determined to start, but that an interim agreement be signed because BSI issued a release yesterday trying to pre-empt this approval by our membership for an interim agreement by saying that they are not going to sign an interim agreement, and this has been specified particularly to the chairman of the SICB who was present and who gave his assurances that the board will be meeting by the 25th of November to deal with this issue, but the membership also passed a motion that if we start the crop without an interim agreement, if that decision is not made, then it would proceed with a public demonstration to have all parties understand the gravity and the need to resolve this issue by the end of this month”, he told us.

Two other resolutions were passed which entailed the establishment of a marketing committee for sugar, and an increase in local sugar prices, the latter of which had been previously submitted to GOB; however, it was not endorsed.

At the conclusion of the meeting, all 18 branch chairpersons expressed their satisfaction with the motions that were passed.

On Friday, BSI/ASR announced that it will now set Tuesday, November 18, as the new deadline for the signing of the proposed agreement with individual cañeros, and while the company claimed that it is willing to make changes to the 18-page document, it won’t amend the controversial clauses regarding cane ownership and payment for bagasse.

On November 21, farmers will be presented with a final draft of the agreement, and by the 28th, they must sign the contract.

In a second release, the factory owners went on the offensive, still not countenancing the prospect of the signing of an interim agreement with the BSCFA, and censuring industrial action on the part of the farmers.

According to the statement, “Some leaders of the BSCFA have again resorted to threats and intimidation, which is not a new phenomenon in the industry. Any undesirable action arising from this can have severe consequences on the sugar industry and the national economy.”

“This has gone on for too long at the expense of building a commercially focused and viable industry. We will not be intimidated by these threats”, it added.

With any agreement between the parties seeming extremely unlikely, and the cañeros having given the SICB five working days to intervene, a demonstration could be imminent as the projected start of the new crop season at the end of November draws dangerously near.