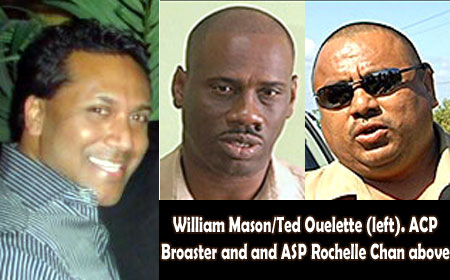 BELIZE CITY, Mon. Aug. 8, 2016–“These guys are trying to frame me and I have a lot of information about them,” cried the imprisoned William Donny Mason in a telephone interview from prison last Monday with Amandala.

Last Monday, Broaster told Amandala that he only became aware of Mason in 2014 after problems of dishonesty surfaced between Mason and one Armead Logan over a property that Logan owned.

According to Broaster, at the time, he conducted a further investigation into the character of Mason, which led him to a Canadian website that alleged Mason’s involvement in illicit activities.

Although Broaster said that he did not inform the former Minister of National Security, John Saldivar, of his findings, he claimed he had informed the current Commissioner of Police, Allen Whylie, who is yet to publicly comment on this matter.

Broaster had further revealed that almost three weeks before he was arrested, Mason had sent an invitation for them to meet.

Amandala has been able to confirm that Mason sent that invitation to Broaster via Hattieville’s ASP Chan.

According to ASP Chan, who spoke with Amandala today, he also met Mason while conducting an investigation earlier this year. According to Chan, one of Mason’s employees was the victim of an assault in La Democracia, and at the time, had been uncooperative with police.

Mason had allegedly intervened and had assured Chan that he would have persuaded his employee to provide the necessary information to police.

According to Chan, Mason then offered a helping hand to the police. Chan conceded that he requested assistance in the form of vehicles and a new structure to house the Mahogany Heights police station. However, Chan told Amandala that Mason never provided the vehicles or building that he had promised.

When Amandala spoke to Mason, he alleged, “I’ve never met Mr. Broaster, and Mr. Broaster is the one that actually sends messages to the Hattieville Police Station’s Inspector Chan to get me to donate motorcycles and homes to them [police]…”

He further shared, “I’ve donated a lot of stuff.”

ACP Broaster refuted those claims and rebutted that all their vehicles were provided by the Government of Belize.

Broaster further told Amandala that he had refused to meet with Mason because his research led him to believe that his character was questionable.

However, according to Chan, they did not meet because, “I think we were busy at the time.”

Mason further told Amandala, “The people of Belize need to know, they need answers and for the citizens of Belize I am prepared to make sure they know the answers. This corruption, crimes against humanity, all these other things need to stop. There are people who are starving in this country who are living below the poverty line. I am the only guy, I know right now that’s hiring people, paying people, helping people, always delivering what I need to deliver and not one of these police [officers] can ever say that I have ever said no to them, including the Ministers. Everyone will say that my character speaks for itself.”