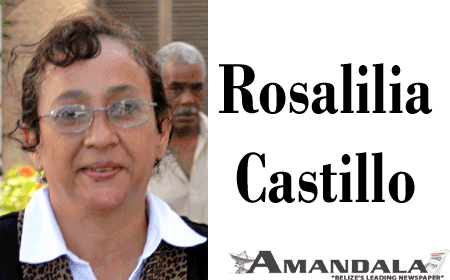 BELIZE CITY, Mon. Apr. 4, 2016–A Cayo businesswoman who was initially indicted for the murder of another woman but who was found guilty of the lesser charge of manslaughter and sentenced to serve 12 years in prison will have to serve those 12 years after a panel of three Court of Appeal Justices ruled today to dismiss her appeal and affirm her conviction and sentence.

Rosalilia Castillo, 46, appeared in the Belize Court of Appeal today along with her attorney, Anthony Sylvestre, to argue her appeal against her manslaughter conviction and consequent sentence.

On the night of Saturday, December 8, 2012, Pamela Perez, 34, a mother of three children, lost her life when she was stabbed by Castillo, with whom she was involved in an intimate relationship.

Castillo was sentenced to 12 years in prison on January 14, 2015, by Justice Antoinette Moore, who heard the case in the Belmopan Supreme Court without a jury.

In her appeal, Castillo’s attorney argued three grounds of appeal against her conviction and sentence.

Sylvestre’s first ground of appeal was that “The learned trial judge erred in failing to give herself a Lucas Direction in respect to that portion of the Appellant’s unsworn statement she disbelieved.”

In her unsworn statement to police, Castillo said, “On the night of the incident, I did not have nothing in my hand, no weapon, no knife, no nothing. I, in no way, didn’t stab Pam. I didn’t even hit her. I did not hurt her in no way. I would have no reason to do such a thing to someone I really love.”

Justice Moore, however, did not believe the unsworn statement that Castillo gave to police after the incident.

In her judgment, she made reference to it: “Because the prosecution’s evidence had made me feel sure and left me without any doubt that the accused caused the neck injury to the deceased, I do not accept the crux of the unsworn statement that the accused did not cause the injury and doesn’t know how it was caused. I necessarily give the statement of the accused little, if any weight.

The Director of Public Prosecutions, Cheryl-Lynn Vidal, who represented the respondent, submitted that there was no miscarriage of justice and that it does not appear that the learned trial judge relied on lies to arrive at her guilty verdict.

Vidal further submitted that there was no room in the evidence for the judge to rule that Perez’s death was an accident.

The appeal was heard by Hon. Justice Manuel Sosa, president of the Court of Appeal; Mr. Justice Samuel Awich and Madam Justice Minett Hafiz-Bertram. The court will deliver in writing the reason for its decision not to allow the appeal at a future date.