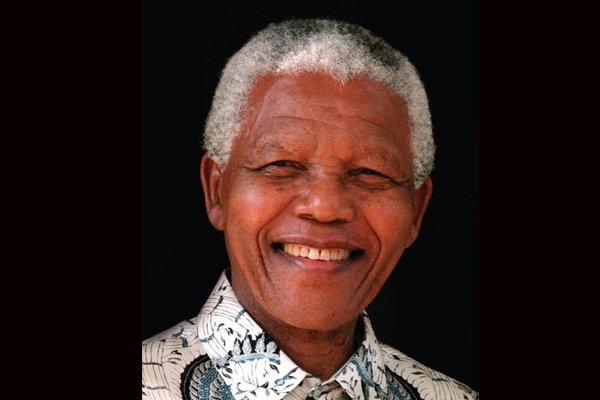 “The struggle is my life”

Tens of thousands of people, including 91 heads of states, are converging on Johannesburg, South Africa, today, to bid farewell to South Africa’s first democratically elected president, Nelson Rolihlahla Mandela, 95, the internationally renowned freedom fighter who gave his life to fighting against apartheid and racism.

Mandela spent 27 years in prison, as a consequence of his unwavering commitment to the struggle, and on April 27, 1994, Mandela participated in the first democratic elections in his country. On his release, Mandela greeted his people with the expression “Amandla” – meaning “power” – and the outstretched fist, the sign of black power.

Nelson Mandela passed away peacefully on Thursday, December 5, 2013, in his home country after battling ill health for a year.

Makaziwe Mandela said that her father had made a “wonderful transition…” surrounded by close relatives, who were given an opportunity to be with him until his last breath.

She said that doctors were caring for him 24 hours a day, rotating on a three-hour basis during his final weeks.

South Africa is dedicating this week to mourning Mandela, aka “Madiba,” with a 10-day schedule of activities which concludes with his state funeral this weekend.

The Government of Belize announced Friday that the Belize Flag will be flown at half-mast from noon today until noon tomorrow, and again on the day of Mandela’s funeral.

“It is impossible for anything like the trajectory of Mandela’s life to occur again. His towering strength, his unimaginable self-sacrifice, and the way in which he governed post-apartheid South Africa without recrimination or reprisal, constitute a greatness that will never again be matched,” the Belize Prime Minister also asserted.

The PUP statement added that, “Nelson Mandela is unquestionably one of the greatest leaders the world has ever known and his life and legacy will forever serve as a shining example of strength, humility, compassion, and service.”

The Caribbean Community Secretariat (CARISEC) announced that the region will be represented at Mandela’s memorial by the chair of the CARICOM Conference of Heads of Government, Kamla Persad-Bissessar, Prime Minister of Trinidad and Tobago.

Persad Bissessar said Mandela’s “struggles, redemption and victory took us to the zenith of human possibility and left a legacy of inestimable value to the world.”

CARISEC notes that “The Caribbean Community was privileged to have Mr. Mandela grace its 25th anniversary celebrations in Saint Lucia, in 1998, where he met with Heads of Government. His buoyant spirit and ebullient sense of humor endeared him to all, exemplified as he rose from his seat and danced to the music at the concert to mark the occasion.”

The statement said that the Heads of Government of The Bahamas, Guyana, Jamaica and Suriname will attend the Memorial, while Grenada will be represented by its Deputy Prime Minister.

Meanwhile, the President of Haiti will travel to South Africa for the state funeral to be held on Sunday, December 15.

Hailed as an international icon

US president Barack Obama, the first Black president of the USA, called Mandela “a man who took history in his hands, and bent the arc of the moral universe toward justice.”

“We will not likely see the likes of Nelson Mandela again, so it falls to us as best we can to forward the example that he set: to make decisions guided not by hate, but by love; to never discount the difference that one person can make; to strive for a future that is worthy of his sacrifice,” Obama said.

“Remarkably, he emerged from 27 years of detention without rancor, determined to build a new South Africa based on dialogue and reconciliation,” said Ban Ki-moon. “I was privileged to meet Nelson Mandela in February 2009. When I thanked him for his life’s work, he insisted the credit belonged to others. I will never forget his selflessness and deep sense of shared purpose.”

Amandala publisher Evan X Hyde writes: “As we celebrate the life and mourn the passing of Madiba, let us not forget all the other South African leaders who were imprisoned with him and all the suffering of the South African people under apartheid and the various racist protocols which preceded it. For myself, on the occasion of Nelson Mandela’s death, I remember Guy Christopher Zimema Mhone, because he was one of those Africans who took a principled stand because of their support for Mandela and the struggle against apartheid.”

Kremandala and the UBAD Educational Foundation (UEF) invite the Belizean public to join in conveying their sympathies on this occasion. A Book of Condolences for Mandela will be available at the Library of African and Indian Studies at Kremandala on Partridge Street. The signing opens at 1:00 p.m. today, Tuesday, December 10, 2013, and continues after 3:00 p.m. for the rest of the week of mourning.

Nelson Rolihlahla Mandela will be laid to rest during an official state funeral, which takes place over a period of 10 days.

There will be public viewing areas throughout South Africa.

Wednesday, 11 December to Friday, 13 December: The remains of Madiba will lie in state at South Africa’s seat of government, the Union Buildings in Pretoria.

It is with deep sadness that the Government has learnt of the passing of the father of South Africa’s democracy – Nelson Rolihlahla Mandela.
He passed on peacefully in the company of his family around 8:50 p.m. on the 5th of December 2013.
The man who was to become one of the world’s greatest icons was born in Mvezo, Tran-skei, on 18 July 1918, to Nongaphi Nosekeni and Henry Gadla Mandela. His father was the key counselor/advisor to the Thembu royal house. After his father’s death in 1927, the young Rolihlahla became the ward of Chief Jongintaba Dalindyebo, the acting regent of the Thembu nation. It was at the Thembu royal homestead that his personality, values and political views were shaped. There can be no doubt that the young man went on to bring about some of the most significant and remarkable changes in South African history and politics.

When he was only 25 years old, Nelson Mandela joined the African National Con-gress. His political career would span decades more – as he himself said: “The struggle is my life.” The young Mandela also qualified and practiced as a lawyer. Together with Oliver Tambo he opened the first black legal practice in Johannesburg.

He was instrumental in the formation of the radical African National Congress Youth League (ANCYL) in the 1940s which was determined to change the face of politics. Mandela was elected the League’s National Secretary in 1948 and President in 1952.

Much of the years that followed saw Mandela deeply involved in activism, rallying for political change against the increasingly aggressive apartheid government. He was a key player in the ANC’s Campaign for the Defiance of Unjust Laws in 1952 and the Treason Trial in 1961. During this time he was incarcerated several times under the apartheid laws and banned from political activity. Realizing that the ANC needed to prepare for more intensive struggle, he became an instrumental force behind the formation of a new section of the liberation movement, Umkhonto we Sizwe (MK), as an armed nucleus with a view to preparing for armed struggle. Mandela was commander in chief of MK.

He left the country in 1962 and traveled abroad to arrange guerilla training for members of Umkhonto weSizwe. On his return to South Africa he was arrested for illegally exiting the country and incitement to strike. Mandela decided to represent himself in court. While on trial, Mandela was charged with sabotage in the Rivonia Trial. This is his famous statement from the dock made in 1964: “I have fought against White domination, and I have fought against Black domination. I have cherished the ideal of a democratic and free society in which all persons live together in harmony and with equal opportunities. It is an ideal which I hope to live for and to achieve. But if needs be, it is an ideal for which I am prepared to die.”

In the same year Mandela and the other accused were sentenced to life imprisonment in the Rivonia Trial and sent to Robben Island, near Cape Town. While in prison, Mandela rejected offers made by his jailers to be released on condition that he renounce vio-lence. “Prisoners cannot enter into contracts. Only free men can negotiate,” he said. He served a total of 27 years in prison for his conviction to fight apartheid and its injustices.

Released on 11 February 1990, Mandela plunged wholeheartedly into his life’s work, striving to attain the goals he and others had set out almost four decades earlier. In 1991, at the first national conference of the ANC held inside South Africa after being banned for decades, Nelson Mandela was elected President of the ANC while his lifelong friend and colleague, Oliver Tambo, became the organization’s National Chairperson.

In a life that symbolizes the triumph of the human spirit, Nelson Mandela accepted the 1993 Nobel Peace Prize (along with FW de Klerk) on behalf of all South Africans who suffered and sacrificed so much to bring peace to our land.

The era of apartheid formally came to an end on April 27, 1994, when Nelson Mandela voted for the first time in his life – along with his people. However, long before that date it had become clear, even before the start of negotiations at the World Trade Centre in Kempton Park, that the ANC was increasingly charting the future of South Africa.

Nelson Rolihlahla Mandela was inaugurated as president of a democratic South Africa on 10 May 1994.

This world icon worked tirelessly even after the achievement of democracy in South Africa to continue improving lives. Even as he retired from politics, his attention shifted to social issues such as HIV and AIDS and the wellbeing of the nation’s children. As a testimony to his sharp political intellect, wisdom and unrelenting commitment to make the world a better place, Mandela formed the prestigious group called The Elders – an independent group of eminent global leaders, who offer their collective influence and ex-perience to support peace building, help address major causes of human suffering and promote the shared interests of humanity.

Mr. Mandela is survived by his wife Graça, three daughters, 18 grandchildren and 12 great-grandchildren.

Continuous live streaming of proceedings will be available at:

A Photographic Tribute in e-book from Brand South Africa’s is available on Amandala’s website here: http://amandala.com.bz/news/wp-content/uploads/2013/12/Madiba061213.pdf.