Yadira Argueta designated 2012 Emblem of Freedom – Queen of the Bay 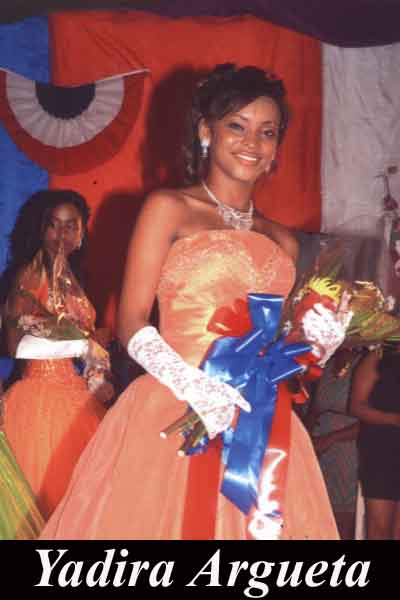 Miss Stann Creek, Yadira Argueta, of Thomas Vincent Ramos House, walked away with the highly coveted title of Queen of the Bay on Saturday night, September 1, at the conclusion of the 67th Queen of the Bay Pageant held on Birds Isle in Belize City.

Argueta was trained by former Queen of the Bay, Reena Usher, who comes from a regal line of pageant winners, including her elder sister, Sherima, who had also won the pageant some years prior.

There were a total of 11 delegates who competed this year in the introduction, talent, evening gown, and question and answer segments.

The pageant is unique for its emphasis on Belizean patriotism, which is emphasized during the talent segment through music, dance and drama. However, the highlight of the night is the curtsy segment, which requires skill, focus and precision as the delegates, adorned with ballroom gowns, greet audience and the reigning queen with her humble bow.

They picked Ivory Mendez, Queen of the Bay Corozal, as the second place winner and Gorlee Marin, Miss Caribbean Sea, as her runner-up as well as Miss Photogenic.

Roderick Quentin Augustus Pitts is the originator of the pageant, whose first queen was Rita Lewis, crowned in 1946.

The Queen of the Bay Designate, Yadira Argueta, is set to be crowed this Monday, September 10, at official ceremonies to be held in Belize City, when the delegates are slated to make their final grand public appearance for the September celebrations season.