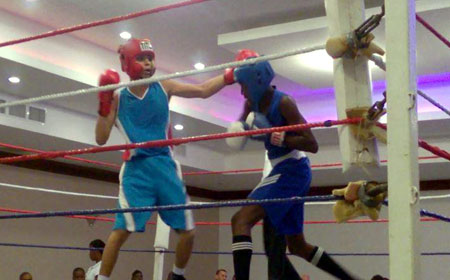 BELIZE CITY, Mon. Aug. 1, 2016–On Friday, July 29, the Belize Boxing Federation hosted a boxing event at Biltmore Hotel, where we saw young and upcoming Belizean boxing talent on display against our neighbors from Guatemala.

In the opening bout between first-time boxers, Malcolm Lopez (12 years old, 42 kg) won by a unanimous decision after 3 rounds over Christopher Espinoza of Guatemala.

In the second bout, Belize’s Jerome McLaren (16 yrs, 49 kg) was defeated by Edyns Asi of Guatemala, after the referee stopped the contest.

In the 4th fight of the night, 16 year old Akeem Avalez (61 kg) TKO’ed his opponent, Edwin Lopez of Guatemala, in the 3rd round.

In the 5th fight, 15 year old Amir Rudon (61 kg) won by a split decision over Danny Augustine of Guatemala.

The 6th fight was a very impressive performance, as Geovanie Rudon (17 yrs, 64 kg) won by unanimous decision over his Guatemalan opponent, Alejandro Wagner.

In the final bout of the evening, the coach threw in the towel, after Guatemala’s Walter Vasquez (69 kg), who is the Gold medalist in the Central American Boxing Championship, was a bit too experienced in the ring for Belize’s Berserick Carballo. Carballo (69 kg), who shows great potential, was a bit displeased with the coach’s decision, and vowed that in the next fight he will destroy his opponent.

All the Belize boxers are trained by Mr. Dwight Cadle and Mr. Leopold Smart. Our young men have great potential, and have the ability to become champions. We must start investing in them and the sport now.

We would like to thank the sponsors, who are: Tipsy Tuna, all the way from Placencia; Belize Telemedia; Belize Bank; Smart; First Stop speedy money; Krem Radio and Krem TV.

We must thank all the parents and all those who came to support our Belizean youth on their journey to success.

This event was sanctioned by the Belize Boxing Federation.