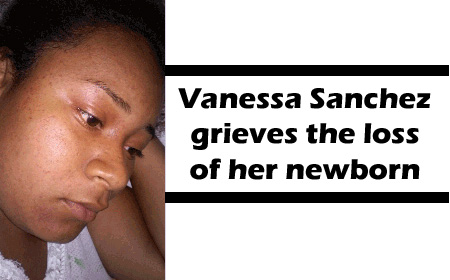 BOOM CREEK, Toledo District,  Thurs. May 12, 2016–The heartbroken and grieving family of Vanessa Sanchez, 19, who delivered her firstborn child at the Punta Gorda Hospital on Sunday morning, May 8, 2016, is calling for an independent investigation into the tragic death of her newborn.

Santos Sanchez, Vanessa’s father, believes that the story of how the baby died does not add up, and he suggests there is a cover-up. For his part, Sanchez thinks that the baby’s death was “unnecessary” and he wants to know if anyone will be held accountable.

As we go to press tonight, Vanessa, who was released from the hospital yesterday, hours before her baby was laid to rest by relatives in Boom Creek, Toledo, is now at the Southern Regional Hospital in Dangriga. Her brother, Israel, told us that the family had to take her back to the hospital today, because she was discharged from the Punta Gorda hospital Wednesday morning with a fever that still did not subside.

Her relatives are still trying to cope with the tragedy. Santos Sanchez told Amandala that his daughter went to all her medical appointments, especially when the time drew near to have her baby, who was in good health prior to his birth.

However, “the hospital staff told us that the baby was born dead, and that the cause was due to the baby strangling on the umbilical cord,” he said.

The family questioned the veracity of this claim: “In doing the autopsy, the lungs did float, which would back up the claim of three witnesses who heard the baby cry after being born,” Sanchez said.

“Vanessa said that she heard the baby cry, and that the nurses put the baby on her. Now why would they do that if the baby was born dead?” he questioned.

“A baby born dead should be black or blue… but our grandson had the clear color of someone being born alive,” Santos Sanchez said.

The doctor gave instructions to the nurses that they should leave the baby and attend to Vanessa, since the baby had only a small chance of survival, the girl’s father recounted.

“We appreciate the attention given to our daughter but ask WHY, and WHERE were the nurses and doctors who were supposed to attend to the small lonely bundle?” Santos asked.

The family also questions why a C-section was not done to deliver the child, since that would have averted the situation where he was strangled by the umbilical cord.

A child born with the nuchal cord (an umbilical cord wrapped around the neck 360 degrees) does not have to die. There is the case of another Belizean mother who some years ago had the startling experience of delivering a baby with the umbilical cord wrapped around its neck, although her last ultrasound before delivery showed that everything was normal. The surprise was frightening but prompt attention by the doctor in charge and the nurse attendants, who keenly followed his instructions for managing the case, as well as some heavenly intervention, saved that baby’s life.

Had the situation been observed at the final ultrasound, the doctor would have ordered a C-section. Finding out the location of the umbilical cord was the main reason for that pre-delivery ultrasound.

There will, no doubt, be probing questions about the management of Vanessa Sanchez’s delivery. Amandala contacted Dr. Francis Murray at the Ministry of Health, who is holding over for Chief Executive Officer, Dr. Ramon Figueroa, currently overseas. Murray said that as far as he is aware, no formal complaint had been filed and he advised that a complaint form should be obtained from the hospital to document the matter for investigation.

The Santos family informed us that they had already filed a statement with Deputy Regional Manager at the PG Hospital, Ruth McDonald, the contact person whom Murray had cited. A representative of the Ministry of Health, Julio Sabido, had called the family back on Wednesday afternoon to say that he wanted to meet with the family and indications are that relatives plan to meet with Sabido about the matter on Friday.