In 15 years, Belize’s fish stock could be depleted 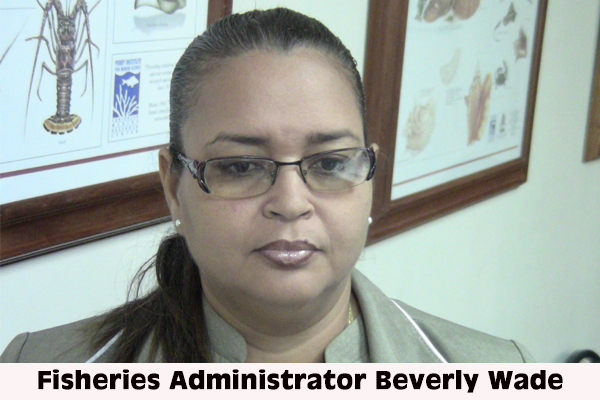 Jamaica legal expert, Dr. Winston McCalla warns: “in some adjoining regions, for example Jamaica, the fish stock has been totally depleted and Belize is very fortunate to have its fish stock, but if it is not properly managed, in 15 years we could have a big problem.”

With a new fisheries act now in the pipeline, the Fisheries Department has initiated a move to revamp Belize’s fisheries regulations; and in order to secure a buy-in from fishermen and other stakeholders in the industry, it has been undertaking a series of consultations across the country of Belize.

One of the biggest concerns of the fishing community is access to what some indicate is a dwindling resource, and traditional fishermen want an assurance that they won’t be boxed out from waters that their fathers and grandfathers have routinely fished because of the new set of fishing rules – particularly the move to establish managed access across the seascape.

Beverly Wade, Fisheries Administrator, told the media in an interview Thursday morning that, “Belize is one of the few countries that continue to have open access fishery, and it’s certainly not sustainable. It’s often referred to as ‘tragedy of the commons,’ because at the end of the day we can’t continue to put the same pressure on the resources and expect them to still be viable.”

The Fisheries Administrator said that one of the things the Fisheries authorities are introducing is limited entry – already in place at the Port Honduras Marine Reserve.

According to Wade “…one of the things that we want to ensure, as the Fisheries Department, is that those people who have depended on the resources for a livelihood over generations – and traditionally – that they are not marginalized eventually when you’re starting to put in limited entry.”

She said that that is one of the issues that have sparked a lot of reaction from the fishing community – and, in her view, “it’s good, because when we are now looking at regulations, we now know really what are some of the things that we have to take into consideration.”

During the past two weeks, fisheries consultations were held in Sarteneja, San Pedro, Caye Caulker, Belize City, Hopkins (attended by Dangriga fishers), Placencia, Independence and Punta Gorda, as a part of an ACP Fish II funded project to assist Belize with revamping its fisheries regulations.

Wade said that the UN Food and Agriculture Organization (FAO) will provide further assistance to finalize the gamut of laws.

Today, however, was slated for a full day of talks with the fishing community, as part of a national validation workshop which was convened at the Northern Fishermen Cooperative Society Limited in Belize City. On the agenda were a review of the outcome of the stakeholder consultations, a review and discussion of the draft regulations, and a discussion on marine reserves and licensing, management and control.

Winston McCalla, a legal consultant hired by ACP Fish II to assist Belize, said, in an interview with the press that, “The broad policy is to make sure that the next generation and future generations will be able to fish. Now in 2004, the number of fishermen in Belize was roughly 1,300; today it is just a little under 3,000. That is good, in a way, but the problem is that the more people come in, the more we need to balance. What we are balancing is the sustainable use, so that future generations and even existing fishermen will continue to fish.”

McCalla pointed to the situation in his home country – Jamaica: “Let me point out this: in some adjoining regions, for example Jamaica, the fish stock has been totally depleted and Belize is very fortunate to have its fish stock but if it is not properly managed, in 15 years we could have a big problem.”

Chris Hedly, director of the Globe Law Group, who is the project leader, echoed those concerns:

“If the fact that there’s less fish out there and the fact that the fish are getting smaller is a sign that the fish are under pressure and if that trend continues, the stocks are going to disappear and nobody is going to have a livelihood, nobody is going to have a job and there’ll be nothing to fish. And that happens in some countries in Europe where I’m from. We’ve had whole industries that have just collapsed, because the stocks had collapsed and people had no jobs. So protecting the resource is actually an essential element to protecting the livelihoods, and the key to all of this is to make sure that you speak to the stakeholders,” he told us.

Belize’s extant fisheries act was passed in 1997, and a new one was drafted in 2011 – however it is awaiting finalization and parliamentary approval.

“The new act presents new opportunities for the department. So there will be new tools that will be in the new act like fisheries management plans; there are new powers for fisheries officers; there is a broader range of regulations that could be adopted,” Hedley said.

The job of Hedley and McCalla is to provide technical inputs for the Belize project, as well as legal drafting that gives due consideration to the rights of traditional fishers.

“The legal challenge, I think, is how you define [those traditional rights] and how you implement that, and so we’re still looking at that question and we are going to speak to the stakeholders about that a bit more today,” Hedley detailed.

“The arguments that are strong, logical and coherent, we will have to take into consideration,” McCalla told the attendees.

McCalla highlighted the need to further address regulations for marine protected areas – which are separate and far more expansive. He also indicated that inland fisheries would be addressed in the long run.

The Belize regulations, which will also look at high seas sanctions, should be finalized by November, Wade told us.

Hedley and McCalla are doing similar work in the Bahamas, and they hope to conclude their Bahamas project at the end of this month.