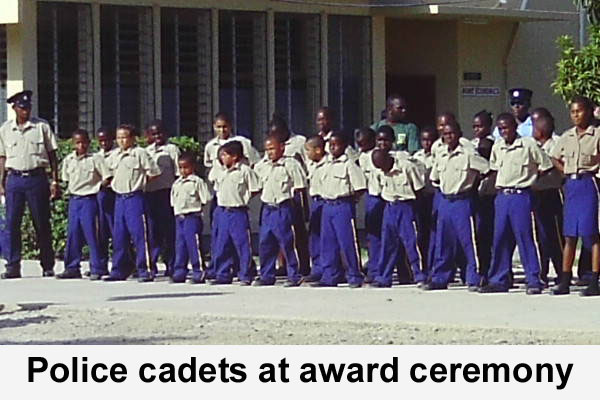 Award ceremonies were held today, Friday, at the Edward P. Yorke High School grounds on Princess Margaret Drive in Belize City to give recognition to police cadets for their various achievements, including outstanding performances in various sporting events.

This took place as part of the 16th Annual National Police Youth Cadet Camp, which is a one-week summer program accommodating over 270 young cadets. The 271 participants, consisting of boys and girls from all over the country, range in age from 8 to 17 years. Throughout the week, they were engaged in camping, survival training, hiking, sporting activities and educational lectures on life skills as well as other activities that made them more aware of their environment.

Sgt. Elroy Carcamo, coordinator of this year’s Police Youth Cadet Camp, which started on July 27 and concluded on August 3, mentioned that this year’s camp is the 16th of such annual national camps, and stated that in addition to survival training, hiking, camping and educational tours, there were sporting events and educational lectures. “Two days of the week we dealt with educational lectures where we try to develop their life skills and then we had disciplines where we taught them about sexual reproductive health, socialization and how to deal with conflicts,” Carcamo explained.

Carcamo added, “…This special group of youth, we don’t just have them once a month or once a year. Every week they participate in practice with the police officers and the camp is like a reward or a bonus for them so we have them coming together as one where they experience different diversities, different ethnicities and so forth…”

Sgt. Carcamo also elaborated on the reason for the award ceremony: “…We have our regional and national sporting competition. And this year we started out with the regional and we haven’t had the nationals as yet; it will happen later on. As a bonus for them what we did instead of just bringing your regional team, we said come together as a group and call it your region…just for this camp. And we had them participating in football, basketball and different sporting activities and that is what they will be awarded for. Also we are looking at the most disciplined cadet on the camp; giving a cadet the Commissioner’s Award which will be given by the Commander of Community Policing and we are looking at giving them certificates of participation within the camp,” he said.

Before the awards were given out, the cadets paraded through some of the principal streets of Belize City, beginning from the Constitution Park and ending at the Queen Street Police Station. Recruitment is done in February and November every year, and interested persons can apply at any of the police precincts.