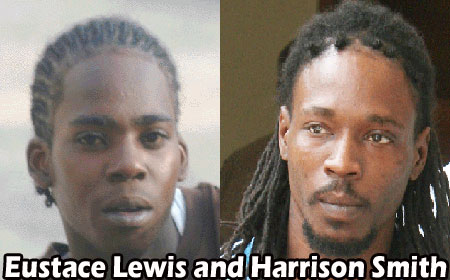 BELIZE CITY–Two men who were making their way towards downtown Belize City shortly after 8:00 this past Friday night were met with a hail of bullets which cost one of them his life, while the other is listed in a stable condition at the Karl Heusner Memorial Hospital (KHMH).

Both victims were later taken to the KHMH, where Lewis was admitted in a stable condition, but Smith succumbed to his injuries shortly after, at about 9:45 p.m.

While police had very little information to share with the media regarding the details of the incident today, Police Press Officer Raphael Martinez told us that seven 9-millimeter shells were recovered from the crime scene, and that three men – Bart Lucas, 26, of a Brides Alley address; Daniel Cain, 26, of a Pinks Alley address; and Oscar Flores, 18, also of a Pinks Alley address – have all since been arrested and jointly charged with murder in connection with the incident.

The trio was arraigned in the Belize City Magistrate’s Court today before Chief Magistrate Ann Marie Smith, after which they were remanded into custody until November 6, 2014.

The families of the victims have so far refrained from commenting to the media, and while we were able to ascertain that the two groups of men are from rival gang neighborhoods in Belize City, Martinez asserted that he cannot definitively say whether the shooting/attempted murder was gang-related, since investigators will have to “dig a little deeper to confirm or deny if it’s so.”

Of note is that both Smith, a father of two children who had beaten two separate murder raps in the past, and Lewis, who is an alleged affiliate of the George Street Gaza (GSG), are no strangers to the law.

Two months before, on October 30, 2007, a jury of nine women and three men returned a not guilty verdict for a then 24-year old Harrison Smith after he was accused of the murder of Reynato Logan, 28, a resident of Punta Gorda who worked as a handyman in Belize City.

Logan died after he was shot at least four times in the body during an altercation through Taylor’s Alley, located off Orange Street in Belize City, on August 8, 2006.

In February 2010, Eustace Lewis and Kariq Tzul, who were both 19 years old at the time, were charged with handling stolen goods after they allegedly carjacked a 1991 black Toyota Camry from Cornelio Day, 68, a taxi driver who was stationed at the Cinderella Plaza Taxi Stand.

Day had reported to police that a tall young man got into his taxi and asked to be taken to the corner of Dean Street and Chapel Lane, but when he got there, he (Day) was reportedly accosted by two other young men who assaulted him and stole his taxi.

The car was recovered two days later after police responded to reports of gunshots on Cairo Street in Belize City and reportedly saw the three teenagers, including Lewis, fleeing the scene and the car.

They were later released on bail of $5,000 each, and we were told that that particular case is still before the courts.