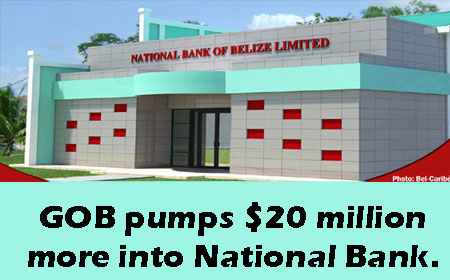 BELIZE CITY–The House of Representatives approved a motion today for a further $20 million capitalization of the National Bank of Belize, in a transaction that will see the Government of Belize acquire 200,000 more shares to double its quantum of shares in the bank, which is now celebrating its first year in existence.

The first $20 million was approved last August, just before the bank opened its doors to begin mortgage lending, primarily to teachers and public officers.

In presenting the motion to Parliament today, Minister of Finance, Prime Minister Dean Barrow, said that the bank has been receiving two loan applications a day, and is now moving into becoming a deposit-taking institution.

“I would want to suggest to the Prime Minister if he can look into moving those loans from the DFC to the National Bank, where students can pay a cheaper rate, at least 8%, and easing on some of the conditions,” Briceño said.

“I know a young man who just got a loan and his interest payments while attending school is $200 a month. He is working. His family cannot afford to pay, so he has to work to find the $200,” Briceño detailed.

Barrow said that while the bank’s lending portfolio was initially focused on mortgage lending, it has now expanded its scope, including mortgage refinancing.

“The remit of the bank has long since expanded and the bank does offer student loans. I am not sure of the size of the student loan portfolio. I don’t see why the same sort of accommodation couldn’t be offered by the National Bank in terms of people being able to refinance the loans that they might currently have with the DFC,” he said, in responding to Briceño.

Barrow promised to look into the policy stance of the bank on refinancing student loans held by institutions such as the DFC.

The National Bank is a state-owned bank chaired by Senator Joy Grant, Minister of Energy, Science, Technology and Public Utilities.

BELIZE CITY, Thurs. June 25, 2015--The latest report issued by the Statistical Institute of Belize (SIB) states that nationwide, the inflation rate was down...
Read more
Economy

BELIZE CITY, Thurs. Apr. 9, 2015--Bank savings accounts and shares in the major utility companies are some of the financial investment vehicles that have...
Read more
- Advertisment -