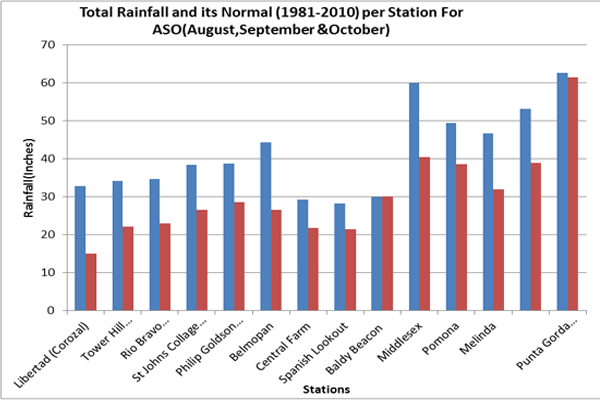 Whereas the 2013 Atlantic Hurricane Season saw a below-average year—due to dry conditions at the mid-level of the atmosphere—Belize experienced above-average rainfall for the last four months of the season, in some cases, double the usual rainfall, according to information supplied to us by forecaster Derek Rudon of the National Meteorological Service.

“This unexpectedly low [cyclone] activity is linked to an unpredictable atmospheric pattern that prevented the growth of storms by producing exceptionally dry, sinking air and strong vertical wind shear in much of the main hurricane formation region, which spans the tropical Atlantic Ocean and Caribbean Sea,” said Gerry Bell, Ph.D., lead seasonal hurricane forecaster at NOAA’s Climate Prediction Center, a division of the National Weather Service. “Also detrimental to some tropical cyclones this year were several strong outbreaks of dry and stable air that originated over Africa,” Bell noted.

Rudon told Amandala that all the experts who made seasonal hurricane predictions called for an above-average season, but the season turned out to be below average.

“It turned out to be the sixth least active season since 1950, with the fewest hurricanes since 1982,” Rudon said.

The National Hurricane Center (NHC) in Miami reported, in its season summary, that, “Thirteen named storms formed in the Atlantic basin this year. Two, Ingrid and Humberto, became hurricanes, but neither became major hurricanes.”

Rudon told us that the average number of hurricanes per season is 6 – this one had 2. On average 3 major hurricanes are formed, but this season saw none, he added.

The NHC noted that, “Tropical storm Andrea, the first of the season, was the only named storm to make landfall in the United States this year. Andrea brought tornadoes, heavy rain, and minor flooding to portions of Florida, eastern Georgia and eastern South Carolina, causing one fatality.”

Rudon said that Belize was affected by one tropical depression – TD#2 – which formed on June 17 near the Bay Islands or 60 miles east of Monkey River around 6:00 a.m. and made landfall with maximum winds of 30 knots in the evening around 4:00 near Big Creek. That depression emerged on June 19 in the Bay of Campeche as Tropical Storm Barry.

There was also plenty of rain from August to October. Middlesex reported the highest increase in rainfall, registering at nearly 60 inches over the three months, contrasting with the average 40 inches recorded since 1981. Punta Gorda was the wettest location with nearly 63 inches of rainfall recorded during that period.

This week’s continuous rains are being caused by a cold front which has stalled over the Bay of Campeche and a surface trough moving in from Caribbean. The rains, said Rudon, should persist over the next couple of days, but ease on Friday.