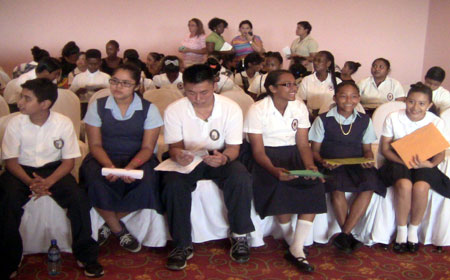 BELIZE CITY, Fri. June 17, 2016–The 25 top scorers in the 2016 Primary School Examination (PSE) were recognized at an award ceremony held this morning at the Ramada Belize City Princess.

“Hard work pays off. What a valuable lesson we celebrate today! The hard work of these students, their parents or guardians, their teachers and school communities, has certainly paid off in their success, and for this, I congratulate you and encourage you to continue on the path of putting in the work and of pushing yourselves to achieve the great things you want to achieve,” said Hon. Elodio Aragon, Jr., Minister of State in the Ministry of Education, Youth, Sports and Culture, who was filling in for Minister Patrick Faber, who is currently overseas.

Kenly Young of St. Andrew’s Anglican School in the Cayo District, who scored 391 points out of 400 on the exam (97.75%), sang the praises of her school—the best, she said—known now not just for its performance in sports but also for performing well academically and on the PSE.

“My advice to all primary schoolers is to never give up. Believe in yourself, work hard and you can achieve all [success]. Also, to always remember that the end of primary school is not the end of the story. It is just the end of the chapter. You have to turn the page and work even harder to get through all the other chapters,” Kenly said.

“For some of us, the PSE made us feel as if we were being attacked by sharks,” said Angelina Urbina of La Inmaculada RC School in Orange Walk, who tied with Kenly for first place in the exam.

She said that she experienced immense nervousness for the first few hours while sitting the PSE, but she was ready to conquer when she assured herself that she was prepared.

“I no longer felt like I was being chased by a pack of wolves; instead I became the pack leader,” she jested.

Urbina underscored the value of an education: “It is with education that our country can move forward, and prosper in the future,” she remarked.

Young and Urbina were presented with the Jane and Michael Nembhard Award, in honor of Methodist educator, Michael Nembhard and his supportive wife, who migrated to Belize from Jamaica in the 1920s. Raina Gonzales of St. Andrews Anglican School, who presented Nembhard’s profile, said that the former educator, who passed away in 1994, gave his best to his students and he demanded the best of them.

He told the parents gathered at the ceremony: “We live in a society where many of our young people are at risk; therefore, the success of your children must be seen in this light. Your children are blessed to have you as parents and guardians. They have persons looking out for their welfare. They have support. Many of our other children are not so fortunate.”

He added that their efforts made a difference not just in their children’s lives, but also to the wider Belizean society: “Every child who achieves this milestone is one less likely to succumb to the risky behavior of the streets that we are all too familiar with,” Aragon said.

He also urged parents to look out not just for their children but also for those who do not have support, “for it takes a village to raise a child,” he emphasized.

Young and Urbina received a gift package with a 3-in-1 wireless printer, a laptop, Microsoft Office software and a USB flash drive, while Marcela Lozano, the second highest scorer, a student of Bernice Yorke Institute, received a laptop. Lozano, Young and Urbina and the other 22 top scorers will each receive a $300 book grant and a tuition scholarship from the Government for up to $1,000 a year towards their high school education.

Top scorers in all six districts will be recognized next week in ceremonies to be held in their districts, and they will also receive book grants.

Santa Teresa R.C. School was recognized as the “most improved” school. 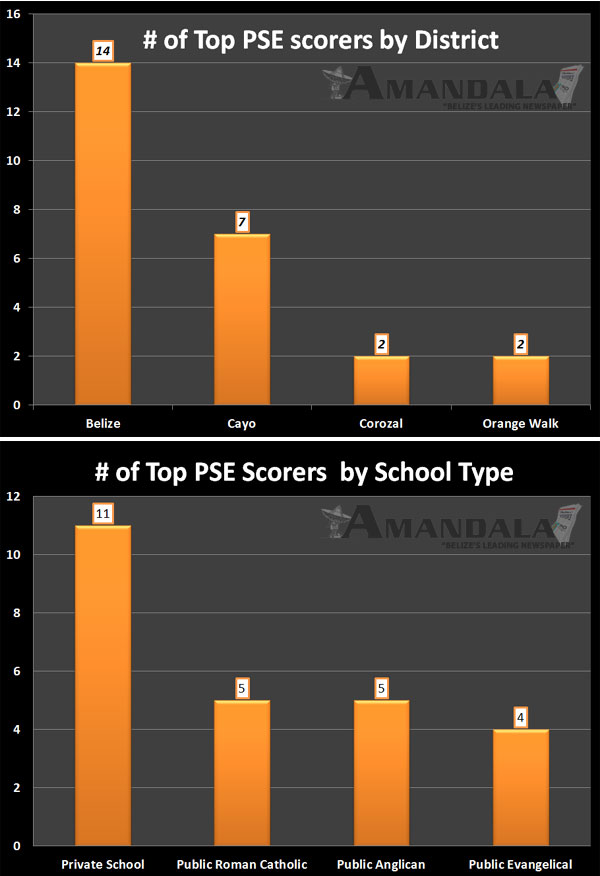