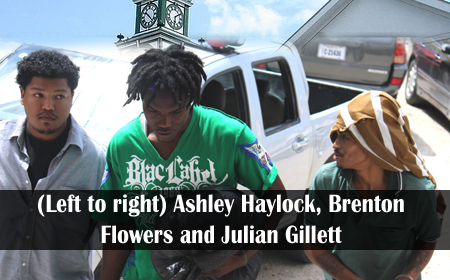 BELIZE CITY, Mon. Mar. 13, 2017–Three residents of Burrell Boom were remanded to the Belize Central Prison this morning after they were arraigned on a charge of aggravated burglary with a firearm.

The three men, Ashley Haylock, 25, Brenton Flowers, 22, and Julian Gillett, 21, appeared before Magistrate Norman Rodriguez, who arraigned them on the charge.

All three accused pleaded not guilty. When Magistrate Rodriguez asked his court prosecutor, Corporal Clarke, if he would be objecting to granting the men bail, Clarke informed him that the offence for which the men were charged falls under the Crime Control and Criminal Justice Act and as such, bail is automatically denied.

Magistrate Rodriguez remanded the three men to prison until their next court date on June 30, when the prosecution will provide them with disclosure of the evidence against them.

The allegation against the three men is that on Thursday, March 9, they entered the dwelling of Selvin Sagastume, 24, a Burrell Boom resident and tractor operator, and pistol-whipped him.

It is not known, however, what kind of injury Sagastume sustained, but he was given a police medico/legal form and was admitted to the Karl Heusner Memorial Hospital, the summary of the facts that is attached to court book said.

In court, Haylock, who had no legal representation, asked Magistrate Rodriguez for permission to speak. Before he was allowed to do so, he blurted out, “This story is completely fabricated.”

Magistrate Rodriguez told him that at that time, he could not speak of the case, since only the reading of the charge was scheduled to take place today.

According to police, on March 9, at around 9:00 p.m., Burrell Boom Police received information that three men were intruders inside a home.

Sagastume told police that he heard someone shouting for his roommate “Christian,” and when he opened his door, he saw the three men standing there.

When the trio stormed into Sagastume’s home, he ran into another room, but he was pursued by his attackers, one of whom stomped in the door to the room and pistol-whipped him.

It is not known if police will lay additional charges on the three men. If they are not able to afford an attorney to apply for bail from the Supreme Court, they will have to remain on remand for 90 days before bail can be considered at the Magistrate’s Court level.