3 years for 6 grams of crack cocaine 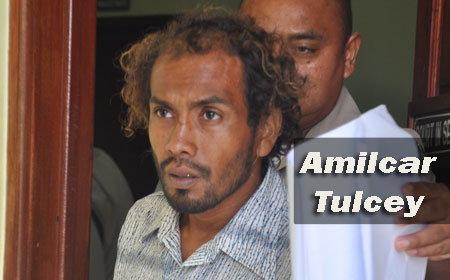 BELIZE CITY, Mon. July 18, 2016–Nine persons were arraigned on charges of possession of an illegal drug and possession of an illegal drug with intent to distribute, but one person out of the nine decided to accept responsibility for the three separate parcels of crack cocaine that the police’s Gang Suppression Unit (GSU) found at a house in Ladyville.

Amilcar Tulcey, 36, pleaded guilty to one count of drug trafficking and two counts of possession. For his guilty plea, he was sentenced to three years in prison and a fine of $10,000 for drug trafficking. For possession of a controlled drug, he was sentenced to two three-month sentences. The sentences are to run concurrently, so he will only serve three years in prison, but if he fails to pay the $10,000 fine, he will have to spend another three years behind bars.

According to GSU officers, yesterday, Sunday, at around 8:45 p.m., GSU police constable McKoy went to the home of Elcelena Tulcey after they had received intelligence that guns and ammunition were at the house.

PC McKoy said that when he entered the house, the owner of the house ran towards the bathroom, telling the officers that her daughter, a minor, was inside.

After the child exited the bathroom with her mother, the GSU officers searched inside the bathroom and inside a black plastic bag that was stuffed inside a waste basket, they found 8 foil parcels, all containing a substance suspected to be crack cocaine, which amounted to 1 gram.

A further search led the GSU team to Elcelena’s bedroom, where inside the foot of an ironing board, police found 5 foil parcels containing one gram of suspected crack cocaine.

Senior Magistrate, Sharon Fraser accepted Tulcey’s guilty plea; however, when she asked him if he knows what the penalty is for drug trafficking, Tulcey said he had no idea.

Tulcey appeared very surprised when he heard the sentence. He left the courtroom with the shock still visible on his face.

This is Tulcey’s first conviction for drug-related offenses.