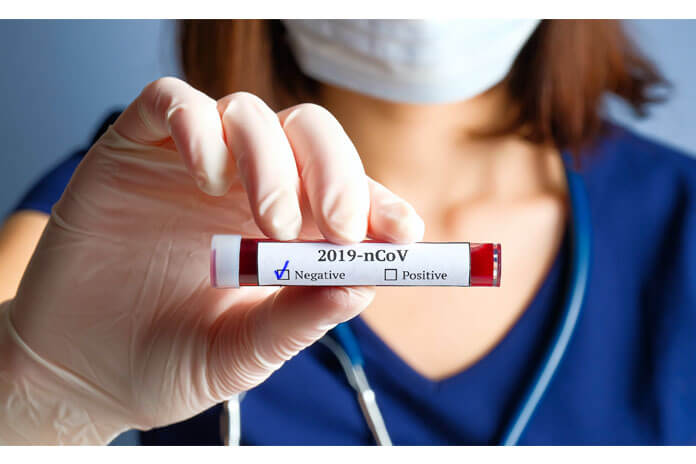 BELIZE CITY, Thurs. Aug. 6, 2020– On Tuesday, August 4, Director of Health Services Dr. Marvin Manzanero, along with epidemiologist Dr. Russell Manzanero, held a press conference to discuss the new COVID-19 cases that had been discovered over the weekend.

Belize recorded a record-high eight new cases on Saturday and an additional case was discovered in San Pedro on the following day, which resulted in a total of nine more active cases of the virus in the country in a matter of twenty-four hours.

As of Tuesday, Dr. Manzanero had announced that, based on the findings of his office, there were still no signs of community spread in the country. At that point, on Tuesday, August 4, Belize had confirmed 57 cases of the virus.

The third person in Corozal, however, had no documented travel history or contact with any person who was known to be infected with the virus, but was symptomatic and hospitalized.

In regards to the two cases from Orange Walk, one had crossed the border illegally, while the other also did not have a travel history or known contact with the virus.

A contact tracing exercise that was done in connection with that case of unknown origin in Orange Walk led to the collection of about thirty samples out of the 130 in total that were part of the mapping process.

The individual whose case was from unknown origin had displayed symptoms such as a fever as early as Tuesday, July 28, and was admitted to a hospital on Thursday, July 30, with additional symptoms such as respiratory complications.

The uncertainty about the circumstances which led to this patient’s contraction of the virus was somewhat resolved when the patient’s wife later revealed that although he had not travelled internationally, he had been procuring contraband goods from a neighbor in Santa Martha village. She further revealed that her husband had been selling fruits at the local market in Orange Walk and that he had participated in a meeting at the Santa Martha Government School on Tuesday, July 21. Additionally, the patient also visited the office of the Orange Walk mayor during that period, which resulted in Mayor Kevin Bernard sanitizing the building and seeking to be tested as a precautionary measure.

After it was revealed that this patient most likely contracted the virus through his purchase of contraband goods, there were only two remaining cases of COVID-19 infections with unknown origins. Dr. Marvin Manzanero, Director of Health Services, in referring to these two cases, said that in both these cases there was the improper use of face masks, as well as exposure to infected persons who were socializing despite displaying symptoms of illness.

The patient in Corozal is a 28-year-old female police officer, and about 40 samples taken were linked to her. She experienced shortness of breath, fever, joint pain and loss of appetite as early as Wednesday, July 22, and went to the hospital on Saturday, July 25, and was swabbed, admitted and isolated immediately.

The patient did require oxygen therapy and is being treated for pneumonia as well. She, too, has not traveled or crossed the border, but had been exposed to coworkers with whom she shared the same night shift. She also visited San Pedro from July 15 to 17 for a court hearing, and also attended a church service on July 25.

The other case in San Pedro is also a female, thirty-one-years old, who experienced classic symptoms such as a sore throat, fever, cough, and chest pains as early as Thursday, July 16.

Two days later, the patient experienced chills and loss of taste and smell, and fatigue. She was not swabbed until Wednesday, July 29, however, and the results were not received until two days later.

In her case, her immediate family members all reportedly displayed symptoms of illness recently, including her common-law husband, as early as Monday, July 13.

The patient had visited different areas of the country during that period. She was seen at multiple locations and at certain private establishments but did not have to be hospitalized, and was allowed to recover at home.

Fifty samples were taken from the approximately 60 persons that came in contact with her. Since her identification, Dr. Manzanero also mentioned that several people called his office to identify potential active cases and inquired about the process of getting tested for COVID-19.

On Tuesday night, the Office of the Director of Health Services identified an additional fifteen active cases of the coronavirus, which surpassed the previous record of cases detected in a single day. These cases were discussed on Wednesday when a joint press conference was held by Prime Minister Dean Barrow, accompanied by Minister of Education, Youth and Sports, Patrick Faber; Minister of Health, Pablo Marin; Chief Executive Officer in the Ministry of Human Development, Judith Alpuche; Director of Health Services, Dr. Marvin Manzanero; and epidemiologist, Dr. Russell Manzanero.

According to Dr. Manzanero, of the fifteen cases, seven were detected in Corozal; seven in Orange Walk; and one in San Pedro, unrelated to the previously identified case on Sunday.
Of the seven cases in Corozal, five entered the country as a part of the repatriation process, while two were linked to the female police officer.

Of the seven in Orange walk, three were initial contacts of the male patient in Orange Walk, and four were not directly linked to any case.

Apparently, these four unlinked cases were scattered through Orange Walk in Calcutta, Shipyard, Guinea Grass, Orange Walk Town and Santa Martha, which now has a total of four cases.

According to Manzanero, these cases are all either linked to contraband activities or to a confirmed case who works in San Pedro.

With regard to the San Pedro case, the Office of the Director of Health Services is anticipating about 81 contacts to be traced from the initial case discovered on Sunday.

What is more alarming is that preliminary reports suggest that an additional fourteen cases had been identified in San Pedro, and contact tracing is still ongoing.

Both Dr. Manzanero and Prime Minister Barrow suggested that this could be a result of the mass gathering that occurred at the Grand Caribe hotel on the weekend of July 17-19, where an annual fishing tournament was held.

The tournament was attended by a large number of Belizeans, many of whom are high-income, influential persons from all over the country and is being classified as a “super spreader” event.

The Prime Minister also said that he had been sent confirmation of a private flight that entered the country on July 10, which apparently contained some Americans who went to San Pedro at the invitation of the husband of the index case who had been showing symptoms from July 13, as mentioned.

The nature of the trip, the Prime Minister said, was to show these visitors a real estate development occurring on the island for investment purposes. Barrow says that if the individual turns out to be one of those who are COVID-19 positive, this could likely be the source of the virus seen in the index case and her family.

The individual in question was evidently also at the fishing tournament days later.

Questions later surfaced about whether the private aircraft had indeed landed in the country, and it is yet to be confirmed whether the landing took place.

The other school of thought is that the second person who tested positive from San Pedro, who is unlinked to the first case, could be the actual index case.

The final possible lead is that the infected individual from Orange Walk who is employed in San Pedro could have carried the virus to the island during his working hours.