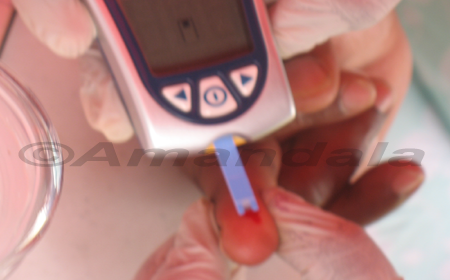 BELIZE CITY, Wed. Nov. 26, 2014–Diabetes is a chronic disease which occurs when the body cannot produce enough insulin or cannot use insulin effectively. Insulin is a hormone produced in the pancreas that allows glucose from food to enter the body’s cells, where it is converted into energy needed by muscles and tissues to function.

A person with diabetes does not absorb glucose properly, and glucose remains circulating in the blood (a condition known as hyperglycaemia) damaging body tissues over time. This damage can lead to disabling and life-threatening health complications.

People are said to have developed diabetes if their fasting blood sugar is found to be over 126 mg/dl.

An A1C test indicates where your blood glucose level has been over the past three months. Results which are greater than 7% are considered high and indicate that your blood sugar has been high or out of control over the past three months. The results from this test can assist the person living with diabetes to review his/her management practices and make the necessary changes to gain control of their condition and prevent complications.

Type 2 diabetes is the most common type of diabetes. It usually occurs in adults, but is increasingly seen in children and adolescents. In type 2 diabetes, the body is able to produce insulin, but either this is not sufficient, or the body is unable to respond to its effects (also known as insulin resistance), leading to a build-up of glucose in the blood.

Many people with type 2 diabetes remain unaware of their illness for a long time because the symptoms may take years to appear or be recognized, during which time the body is being damaged by excess blood glucose. They are often diagnosed only when complications of diabetes have already developed.

Although the reasons for developing type 2 diabetes are still not known, there are several important risk factors. These include:

If this trend continues, by the year 2035, there will be 592 million people living with the condition. Global health expenditure due to diabetes for age group 20 to 79 for the year 2013 was US548 billion. Diabetes caused 5.1 million deaths in 2013. Every six seconds a person dies from diabetes.