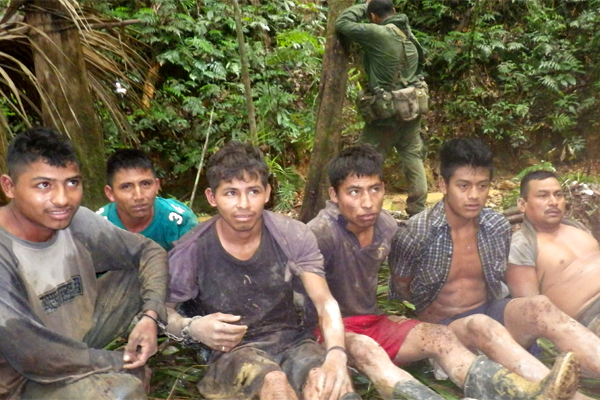 At press time tonight, six Guatemalan gold panners are being held in police detention at the San Ignacio Police Station, pending charges for illegal entry and mining without a license, after they were allegedly caught yesterday afternoon 10.5 kilometers (over 6 miles) inside Belize, within the Chiquibul National Park.

The men were reportedly part of a larger group of about 50, most of whom managed to escape after shots were fired at Belize security forces, leaving the six behind, Derric Chan, Park Ranger for Friends for Conservation and Development, which co-manages the national park, informed Amandala.

Both FCD and police sources have confirmed to Amandala that the men were detained well inside Belize, without required immigration documentation.

Chan said that the detainees were found at about 1:00 yesterday afternoon, “very far in the jungle,” and they had to walk several hours before the joint team comprised of police, military and FCD officers could get to a tractor to transport them to town. They didn’t arrive in San Ignacio until 3:00 a.m. Chan said.

When we asked if the men were armed, Chan indicated that two firearms were found on the scene, but they were not found in the possession of any of the six persons, so they will not be charged for the firearms possession.

Chan said that the indication from the authorities is that there is not enough evidence to pin the charge on any of the six Guatemalans.

The men were reportedly found in the Ceibo Chico area, where Boiton Minerals has been known to mine for gold.

Chan indicated to us that their investigations have led them to believe that the group had been in the area for about three months, panning for gold.

We asked FCD and police whether they had found the six men with any gold, and they said that they did not.

The park manager told our newspaper that the Forestry Department may additionally lay charges on the detainees for defacing a natural feature – that is, the Chiquibul National Park.