The curve continues to climb 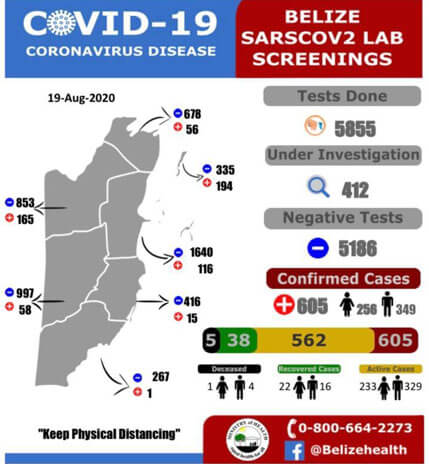 BELIZE CITY, Thurs. Aug. 20, 2020– The persistent call from the Ministry of Health is for all citizens to continue to take all necessary precautions to prevent the further spread of the COVID-19 virus. The number of cases of the virus in the country continues to rise — forming an upward curve that is in general steady, with violent spikes every other day.

Director of Health Services (DHS), Dr. Marvin Manzanero, said that, “If you have 30+ cases identified every day, then that curve will be in ascending order. When does it start to plateau? Once you start having less than the average cases that you have had over the last 10 to 14 days”.

Recent data shared by the Ministry of Health shows a total of 605 confirmed cases in Belize, as of August 19, 2020. Fifty-two (52) positive cases were found from samples processed on Wednesday. Of these, 3 cases were identified in Corozal, 5 were found in Cayo and 9 in the Belize District, with 7 showing up in Caye Caulker, 1 in Ladyville, and 1 in Belize City.

Of the samples processed on that day, 35 new cases were found in Orange Walk. No recovered cases were recorded.

Data disbursed on August 18 revealed an additional 78 new cases, bringing the total number to 553 as of August 18. Of those new cases, fifty-five (55) were detected in the Belize District; and 30 of these cases were found in San Pedro.

In Stann Creek, 1 new case was identified; Corozal recorded 7 new cases and 15 were found in the Cayo District, with about 8 being from the Belmopan area. No recovered cases were recorded on August 18.

The fifth COVID-19-related death is a female patient from Hope Creek, who was transferred from the Belmopan Medical Center to the Karl Heusner Memorial Hospital (KHMH) about 7 days ago. The patient, who had been battling complications, passed away on August 19 in the KHMH’s Intensive Care Unit (ICU).

Two patients with COVID-19 remain intubated, and two others are using supplementary oxygen; also, one person was discharged on Thursday. The KHMH is expecting a highly suspected case to arrive at the hospital as a referral from Corozal.

Data compiled from the Office of the Director of Health Services (DHS) shows that persons between the ages of 20 and 34 make up the majority of cases across the country. Numbers from August 16 show 216 cases, or 47.4% in these age groups.

The Director of Health Services said that potential carriers in the younger groups, those engaged in more social interaction, are causing an expansion of the curve.

“As anticipated and happens in most jurisdictions, the vast amount of people that are turning out positive are those in the young age groups, primarily between 20 to 39 years. These are people who are having more social interactions, who are in the workplace. They are potential carriers and may not be necessarily getting sick, but they are the ones who could potentially continue to expand this curve,” Dr. Manzanero said.

Recently, a request was sent to the Comptroller of Customs to restrict the importation of rapid tests by unauthorized individuals. Dr. Manzanero said that rapid tests will only be used for tourists entering the country; but the Belizean population will continue to be routinely tested by means of the PCR testing methods that are currently being used by MOH.

The Health Ministry is also now using Genexpert testing. This technology can process up to 4 samples at a time. Routine tests, however, are still done in the case of negative results.
The Epidemiological Unit and contact tracing teams are engaged in heightened surveillance and testing at this time and are presenting a detailed breakdown of cases to the Belizean population as new information becomes available.

Citizens are asked to do their part and take all necessary steps to flatten the curve.